Mirror mirror on the wall, who’s the brightest star of all?

by Mihai Andrei
in Astronomy, Discoveries, Space
Reading Time: 2 mins read
A A
Share on FacebookShare on TwitterSubmit to Reddit 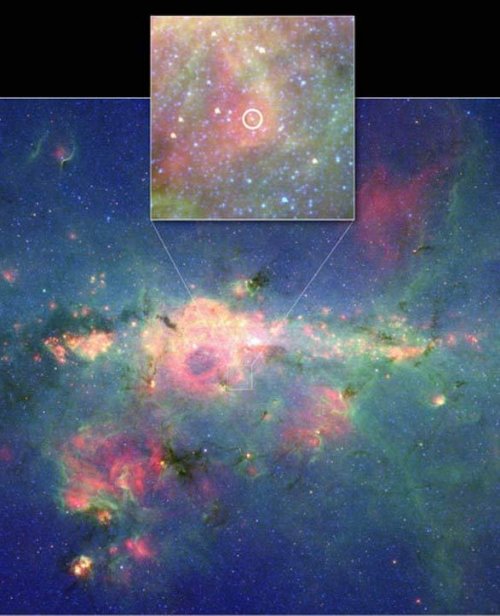 The thing is that measuring brightness is not an exact field and sometimes results vary. This challenger is estimated to shine at the wattage of 3.2 million Suns, while the current record holder, Eta Carinae, has over 4 million Suns. Despite the fact that current calculations show that Eta Carinae will still hold the record, things are not so clear. This was the case when it was the challenger, and the record holder was the Pistol Star.

At the moment, Eta Carinae is the most massive nearby star that can be studied in great detail and it is believed that it will become a supernova in the nearby future (nearby in astrological time). Stars of its type have the mass of “just” 100 times the mass of the Sun, and they produce more than a million times as much light as the Sun, but they are quite rare. Just several are known in the whole galaxy. Scientists have studied it for a long time, because it is believed that GAMMA-RAY bursts produced by the collapse of massive stars may have triggered mass extinctions on Earth. They have been worried that this might be the case for Eta Carinae, but it is currently believed that this will not happen, because its axis is not pointed towards our planet.

Both Eta Carinae and the Peony nebula star (challenger) are evolved blue giants known as “Wolf-Rayet” stars, which have masses of 100 to 200 Suns. Either could self-destruct as a supernova at any moment.
“As we get better measurements, these things change around a bit,” says Michelle Thaller at NASA’s Jet Propulsion Laboratory in California, who was not involved in the study. “These are real drivers of a galaxy’s life cycle, when these things go off, they will probably kick off a new generation of stars.”