Physicists create a supernova in a jar 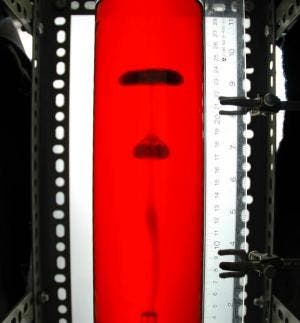 A supernova is a stellar explosion of cosmic proportions, that often can outshine the entire galaxy it is located in, before fading away in a matter of weeks or months. During this short period however, supernovae emit as much energy as the Sun emits during its entire life span – it’s the same kind of phenomena that researchers from the university of Toronto and Rutgers managed to mimic at scale.

In a certain (quite common) type of supernova the detonation starts with a flame ball that is buried deep in a white dwarf; the flame ball is much hotter and brighter than the environment surrounding it, so it rises rapidly making a plume topped with an accelerating smoke ring.

The autocatalytic reactions mainly do two things: they release heat and change the chemical composition of the liquid, which causes some forces that stir it, further progressively amplifying the effects. 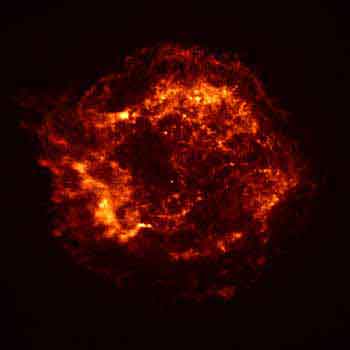 “A supernova is a dramatic example of this kind of self-sustaining explosion in which gravity and buoyancy forces are important effects. We wanted to see what the liquid motion would look like in such a self-stirred chemical reaction,” says Michael Rogers, who led the experiment as part of his PhD research, under the supervision of Morris.

“It is extremely difficult to observe the inside of a real exploding star light years away so this experiment is an important window into the complex fluid motions that accompany such an event,” Morris explains. “The study of such explosions in stars is crucial to understanding the size and evolution of the universe.”

“We created a smaller version of this process by triggering a special chemical reaction in a closed container that generates similar plumes and vortex rings,” says Stephen Morris, a University of Toronto physics professor.