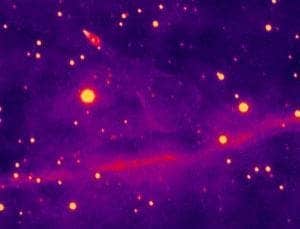 In case you’re wondering, the biggest ‘guitar’ in our galaxy is in fact a pulsar that was nicknamed The Guitar Pulsar. It’s basically a stellar corpse that emits a beam of electromagnetic radiation that just shreds interstellar gas, creating a wake of hot hydrogen shaped just like a guitar.

Little is known about these remnants, from any point of view. In order to track down it’s birthplace, Nina Tetzlaff at the University of Jena in Germany and her colleagues calculated the location of 140 groups of stars, as they were 5 millions ago.

The pulsar was practically launched from a cluster of massive stars, moving at about 1500 kilometres per second, which is just huge. They were able to pinpoint the exact location it was formed, but why it moved so fast still remains a mystery. Speeds over 1000 km/s are practically not used in current astronomy models, and are considered by many to be borderline impossible.