The Phoenix Lander was definitely a marking moment for scientists and researchers, who now have the opportunity of actually seeing what they could have just speculated about before. For example, just take a look at this picture the probe sent back on Friday. 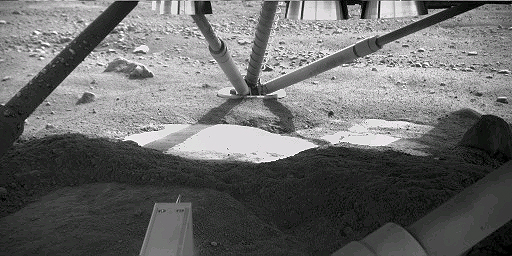 Phoenix scientist Ray Arvidson said there may be ice directly under the Phoenix lander, exposed in the blast zone by the retrorockets used for Phoenix’s soft landing. This Friday image showed a small portion that looks really bright and smooth, way more smoother than the surrounding soil.

This was in fact one of the primary objectives, so scientists are really thrilled that the lander could have landed on their goal. Despite the fact that it’s still not sure that the material is ice, the abundance of excavated smooth and level surfaces adds evidence to the hypothesis that Phoenix landed on an ice table covered by a thin layer of ice/snow.

This area, as most scientific discoveries, doesn’t have quite the name you’d expect; researchers call it “Holy Cow”, because it’s the very first thing they said when they received the picture. Also, it’s interesting to see the retrorocket nozzles at the top of the image. Still, more pictures and exposures will be necessary in order to say for sure if it actually is ice or not.