Ridges of Martian impact craters could be fossils of cracks in the Martian surface, formed by minerals deposited by flowing water, according to a new research.

The findings, accepted for publication in Geophysical Research Letters, one of the most prestigious journals in the field, could explain a mysterious network of ridges that vein across the Red Planet’s subsurface – describing a watery underground which would mark the perfect place to search for life on the Red Planet. The research was conducted by Lee Saper, a recent Brown graduate, with Jack Mustard, professor of geological sciences.

Researchers from Brown University examined over 4000 such ridges, across two areas with many craters – the Nilosyrtis highlands and the Nili fossae area, studying their orientation and mineral composition. They concluded that the ridges started out as cracks inside the craters – this is confirmed by their orientation, which matches that of the craters. What really lit their lightbulb though was the fact that they seem to appear only in areas where the rock is rich in iron-magnesium clay – a mineral which is regarded as a water indicator.

“The association with these hydrated materials suggests there was a water source available,” Saper said. “That water would have flowed along the path of least resistance, which in this case would have been these fracture conduits.” 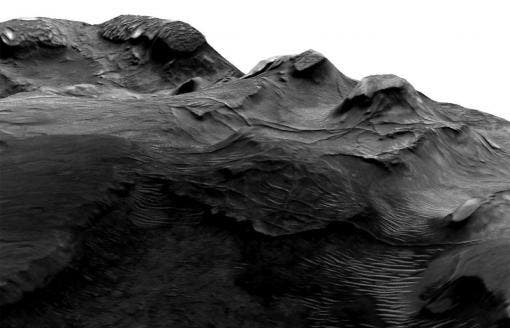 So according to them, the water filled the crater-related cracks, eroding and depositing minerals as it flowed through; as geologic time passed, the resulting minerals were harder and lasted, while the rest of the rock was eroded away – leaving those minerals exposed.

This study comes just a week after a paper in the journal Nature Geoscience claimed that an ancient crater lake could hold signs of life from beneath the Martian surface, and during the period when Curiosity is wandering on Mars, trying to find evidence of actual or past life.