Cheese has a 7500 year history

by Mihai Andrei
in Agriculture, Archaeology
Reading Time: 2 mins read
A A
Share on FacebookShare on TwitterSubmit to Reddit

Polish researchers have found the earliest evidence of prehistoric cheese-making from a study of 7,500-year-old pottery fragments that are perforated much like today’s modern cheese strainers. 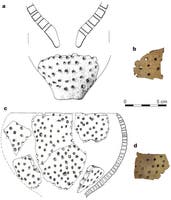 When early men figured out how to make cheese, it was a big thing; at that time, livestock was too precious to use just for the meat, and mankind was largely lactose intolerant, making cheese the perfect culinary alternative. The introduction of dairying turned out to be a critical step in early agriculture, with products being rapidly adopted as a major component of the diet.

Researchers from the University of Bristol in Britain, with colleagues in the United States and Poland analyzed fatty acids embedded on prehistoric pottery from the Polish region of Kuyavia, and they found the pottery was used to separate milk into fat-rich curds for cheese and lactose-containing whey. Whey (or milk serum) is the liquid remaining after milk has been curdled and strained – a byproduct of cheese manufacturing.

“The presence of milk residues in sieves … constitutes the earliest direct evidence for cheese-making,” said Mélanie Salque from Bristol, one of the authors of the research, which was published in the journal Nature. Peter Bogucki, another researcher involved in the work, said: “Making cheese allowed them to reduce the lactose content of milk, and we know that, at that time, most of the humans were not tolerant to lactose.”

Traces of milk have been found in 8.000 year old sites in Turkey and Libya, but with no real indication that the milk was turned into cheese.

“It is truly remarkable, the depth of insights into ancient human diet and food processing technologies these ancient fats preserved in archaeological ceramics are now providing us with,” said Richard Evershed, who heads the Bristol team.