Surprise In The Organic Orchard — A Healthier Worm In The Apple

by Mihai Andrei
in Genetics, Studies
A A 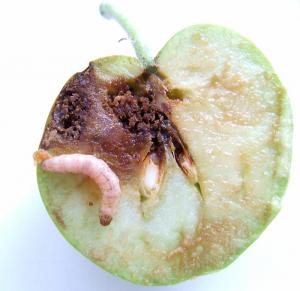 Just like you can catch a cold from a virus so can other animals, as well as insects. But they can catch more than just a cold. Some viruses are dangerous for the pests but they are not of any danger to humans or other animals. The proverbial worm in the apple, the codling moth caterpillar, has been controlled in European orchards for years with a baculovirus called codling moth granulovirus (CpGV). In some cases that takes care of things for good but in other cases the virus loses its effectiveness. Pest resistance to chemical insecticides is not that strange.

Science magazine stated that a single gene in the codling moth can make it 100,000 times less susceptible to the granulovirus. This was reported in southwest Germany by a team of insect virologists and geneticists from the Agricultural Service Centre of Rhineland-Palatinate (DLR Rheinpfalz), the German Federal Biological Research Centre (BBA Darmstadt), the University of Hohenheim, and the Max Planck Institute for Chemical Ecology (MPICE Jena).

So scientists working in agriculture are carefully planning for the future in response to this alarming result. It is hard to say what results they are going to achieve because they are going to have to find virus varieties which can overcome the Z-linked resistance and also make a resistant management strategy.