New evidence suggests Neanderthals organized their living spaces, much like humans do

As more and more research is conducted on Neanderthals, we start to understand that we’re not as unique as we thought, and that they were equals or even superior in many ways. Now, researchers have found that Neanderthals organized their living spaces in ways that would be familiar to modern humans.

The findings show that they butchered animals, made tools and gathered around fire in very distinct areas of their homes.

“There has been this idea that Neanderthals did not have an organized use of space, something that has always been attributed to humans,” said Julien Riel-Salvatore, assistant professor of anthropology at the University of Colorado Denver and lead author of the study. “But we found that Neanderthals did not just throw their stuff everywhere but in fact were organized and purposeful when it came to domestic space.”

The findings were based on excavations at Riparo Bombrini, an unusual collapsed rock shelter northwest Italy where both Neanderthals and early humans lived for thousands of years. Because the two subspecies lived at different times throughout history, researchers wanted to compare how they organized their personal spaces.

The site comprises three levels assigned to Neanderthals. Archaeologists found that Neanderthals had three main areas in their homes:

“We found some ochre throughout the sequence but we are not sure what it was used for,” Riel-Salvatore said. “Neanderthals could have used it for tanning hides, for gluing, as an antiseptic or even for symbolic purposes – we really can’t tell at this point.”

“When you make stone tools there is a lot of debris that you don’t want in high traffic areas or you risk injuring yourself,” Riel-Salvatore said. “There are clearly fewer stone artifacts in the back of the shelter near the hearth.” 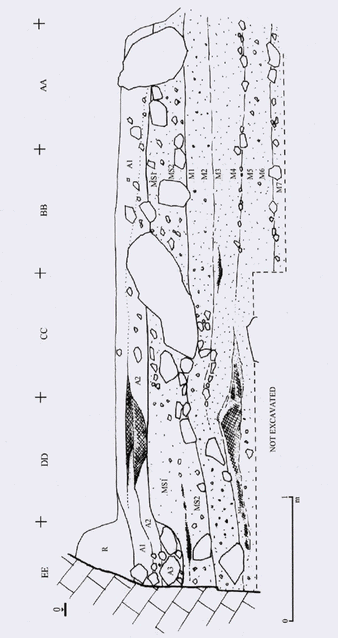 “This is ongoing work, but the big picture in this study is that we have one more example that Neanderthals used some kind of logic for organizing their living sites,” Riel-Salvatore said. “This is still more evidence that they were more sophisticated than many have given them credit for. If we are going to identify modern human behavior on the basis of organized spatial patterns, then you have to extend it to Neanderthals as well.”

Scientific Reference: The study was published in the latest issue of the Canadian Journal of Archaeology. Co-authors include Ingrid Ludeke, a University of Colorado Denver MA student; Fabio Negrino of the Istituto di Storia della Cultura Materiale (Genoa, Italy); and Brigitte Holt, of UMass – Amherst.