by Tibi Puiu
in Anthropology
Reading Time: 2 mins read
A A
Share on FacebookShare on TwitterSubmit to Reddit 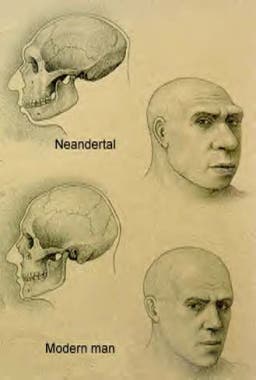 German scientists at the Max Planck Institute for Evolutionary Anthropology in Leipzig have completed the first high-quality draft Neanderthal genome sequence, marking another leap forward in understanding our fellow hominids and how our species interacted, if there was such thing, with other hominid species. Moreover, the whole Neanderthal genome has been made freely available to the scientific community to accelerate research.

Svante Paabo and his colleagues at the Max Planck Institute first made world headlines when they presented the first Neanderthal genome draft in 2008, after they sequenced DNA samples taken from three bones found in a cave in Croatia. Now, for their most recent work, the German scientists sequenced a Neanderthal genome from  a toe bone excavated in 2010 in Denisova Cave in southern Siberia.

“The genome of a Neanderthal is now there in a form as accurate as that of any person walking the streets today,” Svante Paabo, a geneticist who led the research

The team of researchers have already been able to determine which genes the Neanderthal specimen had inherited from its mother, and which from its father – something that wasn’t deemed possible a mere ten, even five years ago. At the moment, analysis is underway to determine how the Neanderthal relates to modern humans and Denisovans — another extinct human species whose genome was previously extracted from remains found in the same Siberian cave. Previously, it was established that Neanderthals share %99.7 of their genes with modern day humans, and some studies claim that 4% of our genes are Neanderthal, although inactive.

What’s of greater importance, maybe, is that this extremely high quality genome sequence will be openly available to the scientific community for further studying.

UPDATE: Some websites have used headlines for this announcement that reference the sequence as “COMPLETE”. It’s worth noting that we have yet to sequence the Neanderthal genome in its entirety, and as such titles as these are misleading. What this high-quality draft released by the German researchers represents is the best we have at the moment, though, and still marks an important achievement.