by Tibi Puiu
in Genetics, Studies
Reading Time: 3 mins read
A A
Share on FacebookShare on TwitterSubmit to Reddit

Last year, researchers at the Max Planck Institute for Evolutionary Anthropology, produced a draft of the Denisova genome, in order study in what proportion they relate to homo sapiens sapiens. The  Denisovans, are a new group of hominids, discovered just two years ago, which is believed to have lived around 30,000 years ago, alongside Neanderthals and early homo sapiens ancestors. Since they first released their draft, the researchers from Germany have now produced a highly refined version of the Denisovan genome, sequenced 30 times, which they also publicaly released on the web to help other scientists with their study.

The idea came after Max Planck paleogeneticist Svante Pääbo was at a meeting in Sweden, and noticed there that his fellow colleagues were working and studying based on year-old sequence data, and that the all the other labs in the world were probably using the same outdated material as well.

“I felt bad knowing that we had this very much better version of the same genome and that it would be a few months before it became available,” says Pääbo.

Even though Pääbo and colleagues have yet to release the paper they’ve been working on for such a long time, the researchers decided to allow their colleagues to download the sequence data for the high-resolution genome today. The sequence can be freely downloaded from  both on Max Planck website and through Amazon’s Web Services. Speaking of which,  this latest version of the genome they’ve released online and which will be presented shortly for scientific publishing, has every position sequenced an average of 30 times – all based on DNA extracted from less than 10 milligrams of the finger bone of the ancient girl found in the Denisovan caves, in Siberia. 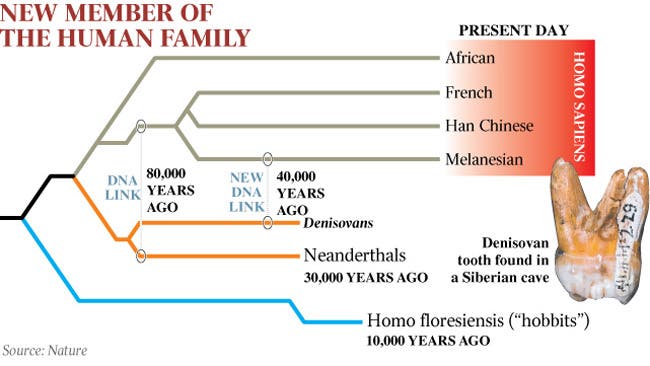 With this higher resolution of the genome in their hands, the scientists can now more accurately determine how our hominid ancestors influenced modern man, since DNA differences can be precisely extracted from that of living humans and Neanderthals. It’s believed that early humans interbred with both Neanderthals and Denisovans. We all currently have Neanderthal genes inside our DNA, however they’re inactive; modern humans in Melanesia and other parts of Asia have inherited about 4% of their DNA from Denisovans.

A third group of extinct humans, Homo floresiensis, nicknamed “the hobbits” because they were so small, also walked the Earth until about 17,000 years ago. It is not known whether modern humans bred with them because the hot, humid climate of the Indonesian island of Flores, where their remains were found, impairs the preservation of DNA.

Of course, to protect their ability to publish a paper, the Max Planck team is releasing the sequence under a license that prohibits anyone else from doing an analysis of the complete genome, nevertheless anyone, scientist or not, is now free to analyze specific genes in the genome without having to wait for the study to pass peer review.