by Mihai Andrei
in Archaeology, Discoveries
A A 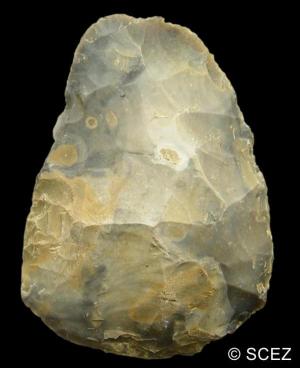 An amateur Dutch archaeologist named Jan Meulmeester made a startling find which pleases scientists: an amazing collection of 28 flint hand-axes, dated by archaeologists to be around 100,000 years-old. He found them in an area about 13km off Great Yarmouth.

Jan Meulmeester diggs regularly for mammoth bones and fossils in marine sand and gravel delivered the materials, but nobody expected him to find something of this significance. These are the finest hand axes ever to be found from the Ice Age and from the English waters. Phil Harding of Wessex Archaeology and Channel 4’s Time Team programme has studied the Ice Age for a big part of his life. His claim on the issue:

“These finds are massively important. In the Ice Age the cold conditions meant that water was locked up in the ice caps. The sea level was lower then, so in some places what is now the seabed was dry land. The hand-axes would have been used by hunters in butchering the carcasses of animals like mammoths.”
He added: “Although we don’t yet know their precise date, we can say that these hand-axes are the single most important find of Ice Age material from below the North Sea.”

The fact that mammoth teeth and bones were discovered along with the axes seems to support his ideas. The findings were made public by Wessex Archaeology. Also, Ian Oxley, Head of Maritime Archaeology at English Heritage points out the importance of these findings:

“These are exciting finds which help us gain a greater understanding of The North Sea at a time when it was land. We know people were living out there before Britain became an island, but sites actually proving this are rare.”