Caesar's incursion in Britain might have been more successful than we thought.

by Mihai Andrei
in Archaeology, News
A A

The legendary Julius Caesar led the Romans with unprecedented strength, controlling almost all the Mediterranean coast, as well as large swaths of today’s France, Spain, Greece, and Turkey. Now, for the first time, archaeologists have found solid evidence that Caesar also landed and conquered parts of Britain.

The last conclusive study on Caesar’s conquests was 100 years ago. Now, researchers from the University of Leicester have found a trove of Roman weapons and other artifacts indicating the presence of a Roman base at the city of Ebbsfleet on the Isle of Thanet, in southeast England. The artifacts were found in a fort-like structure dating from the 1st century BC, in Caesar’s time.

Based on this new evidence, archaeologists believe that Caesar’s fleet arrived in Britain in 54BC, with the fort being built up to protect the ships. This location matches Caesar’s own account of his landing in 54 BC, with local topography fitting his description: great sea visibility, the existence of a large open bay (Pegwell Bay), and the presence of higher ground nearby. Caesar’s account has been known for a long time, but this is the first time evidence has been found to confirm this story. Dr. Andrew Fitzpatrick, Research Associate from the University of Leicester’s School of Archaeology and Ancient History said:

“Sailing from somewhere between Boulogne and Calais, Caesar says that at sunrise they saw Britain far away on the left hand side. As they set sail opposite the cliffs of Dover, Caesar can only be describing the white chalk cliffs around Ramsgate which were being illuminated by the rising sun.” 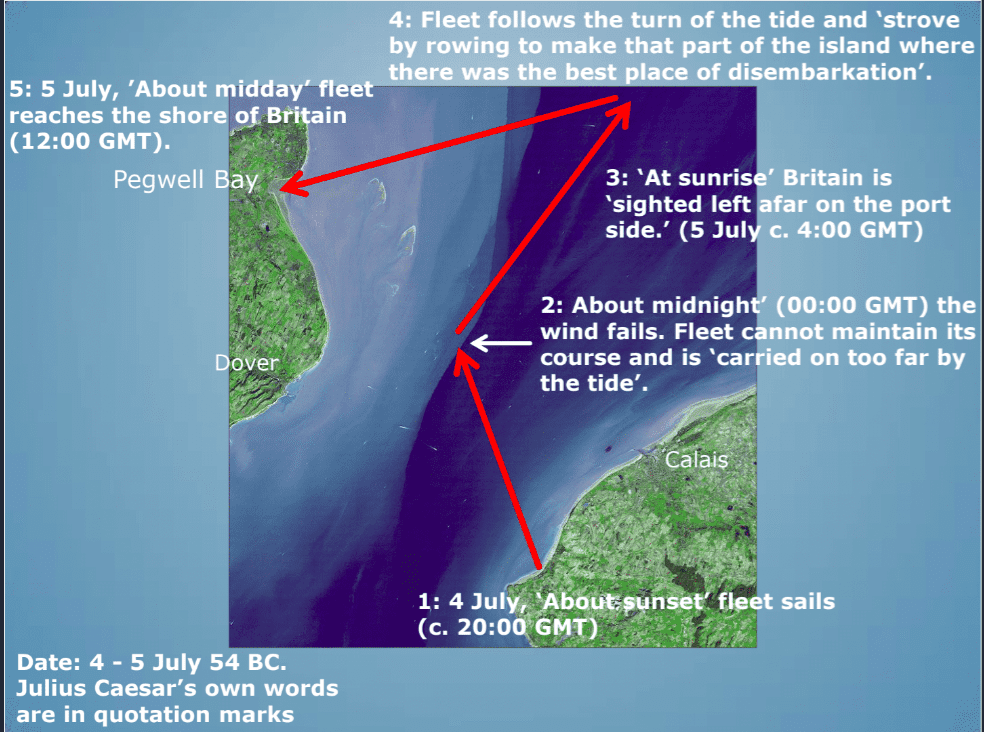 The landing went smoothly, but a massive storm damaged many ships as they were at anchor. This description too seems to fit with the local setting. Fitzpatrick continues:

“Caesar describes how the ships were left at anchor at an even and open shore and how they were damaged by a great storm. This description is consistent with Pegwell Bay, which today is the largest bay on the east Kent coast and is open and flat. The bay is big enough for the whole Roman army to have landed in the single day that Caesar describes. The 800 ships, even if they landed in waves, would still have needed a landing front 1-2 km wide.”

All of this seems to indicate that this is indeed Caesar’s landing place and not another expedition. The shape, size, and defense type of the fort, along with the presence of iron weapons including a Roman pilum (javelin) all suggest that the site at Ebbsfleet was Caesar’s Roman base in Britain.

“Caesar also describes how the Britons had assembled to oppose the landing but, taken aback by the size of the fleet, they concealed themselves on the higher ground. This is consistent with the higher ground of the Isle of Thanet around Ramsgate.”

“These three clues about the topography of the landing site; the presence of cliffs, the existence of a large open bay, and the presence of higher ground nearby, are consistent with the 54 BC landing having been in Pegwell Bay.”

The archaeological site is now 900 meters inland but during the time of Caesar, it was closer to the coast. The site is estimated to be about 20 hectares large and has changed quite a bit, just like the Roman Republic changed during Caesar’s time. Caesar played a critical role in the events that led to the demise of the Roman Republic and the rise of the Roman Empire. However, his reign was not spared of hardship.

It has long been thought that because Caesar’s invasions of today’s France (then Gallia) were so unsuccessful, Caesar didn’t really invade Britain or leave an occupying force there. Scholars used to think that the Romans at the time barely had an effect on the Britons. But the archaeological team challenges those beliefs, saying that Caesar’s forays into Britain, beyond the known world, caused a sensation. They also argue that at the time, victory was achieved by defeating your opponent in battle, not occupying their lands, so Caesar might have considered that he defeated the Britons even though he didn’t leave many (or any) troops behind.

Lastly, scientists say, this paved the way for further Roman incursions onto Britain, culminating with its conquest by emperor Claudius almost a century later. Professor Colin Haselgrove, the principal investigator for the project from the University of Leicester, explained:

“It seems likely that the treaties set up by Caesar formed the basis for alliances between Rome and British royal families. This eventually resulted in the leading rulers of south-east England becoming client kings of Rome. Almost 100 years after Caesar, in AD 43 the emperor Claudius invaded Britain. The conquest of south-east England seems to have been rapid, probably because the kings in this region were already allied to Rome.”

“This was the beginning of the permanent Roman occupation of Britain, which included Wales and some of Scotland, and lasted for almost 400 years, suggesting that Claudius later exploited Caesar’s legacy.”

You can watch a more thorough presentation of the findings on BBC Four’s Digging For Britain.