Petra is one of the most beautiful and imposing archaeological sites in the world. Located in southern Jordan, the site is famous for its rock-cut architecture and water conduit system. Petra is even named the Rose City due to the color of the stone out of which it is carved. Two thousand years ago, the city was one of the biggest and most cherished water stops in the Middle East. Camel caravans traveling great distances to ensure prosperous trade would stop there to rest, renew their supplies and, of course, trade some of their valuable goods. The city was as prosperous as the trade it helped secure.

Petra was the capital of the Nabateans, an Arab people known for their engineering ingenuity as well as their ability as merchants. The Nabateans understood Petra’s significance as a water supply and wanted to advertise their ability to tame nature and harvest water, so they designed lavish gardens with fountains and even an open-air pool. In the middle of the desert, this was unthinkable.

“The pool marks the terminus for an aqueduct that transported water from one of the springs, ‘Ein Brak, located in the hills outside of Petra,” Leigh-Ann Bedal, associate professor of anthropology from the Penn State Behrend College, told Haaretz. “The pool’s monumental architecture and verdant garden served as a visual celebration of the Nabataeans’ success at providing water to the city center.”

In fact, this whole thing relied on a hydraulic system the Nabateans invented which allowed them not only to access but also to store water. They had a surprisingly intricate system of channels, ceramic pipelines, underground cisterns and water tanks, which not only distributed, but also filtered water, thus allowing them to cultivate crops, harvest fruit, produce wine and olive oil. 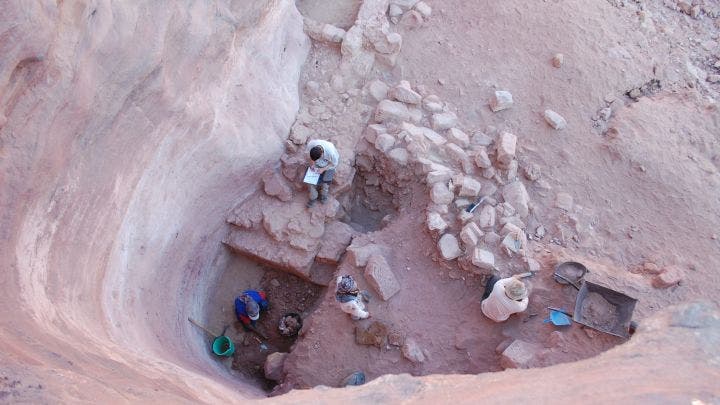 Water shaft in ancient Petra: Through it, water cleverly harvested from what little rain there is in the Jordanian desert was lowered to the level of the pool. Credit: Leigh-Ann Bedal

Petra lies at two of the ancient world’s most important trade routes: one linked the Red Sea with Damascus while the other linked the Persian Gulf with Gaza. Both these roads produced immense wealth, but they were also harsh and dangerous. Petra served as a safe haven. Not only did it provide good food and comfortable accommodation, but also the most important thing of all: water. But this was not cheap. Caravans had to offer many gifts not only to the king and his entourage but also to gatekeepers and priests. The price was high, but at the end of the day, it was worth it.

Nabateans wanted to make sure people got the message – that Petra is an amazing city – and what better way to do that, other than building lush gardens in the middle of the desert? The gardens were a propaganda machine, a display of sheer power, and one you had to see to believe.

The gardens likely seemed like a miracle to most travelers. Petra only gets 10 to 15 centimeters of rain a year (4-6 inch). All of it was collected religiously, but that’s not nearly enough for a garden. In order to ensure proper irrigations, Petra’s inhabitants had to develop techniques to channel, purify and even pressurize the water – something almost unthinkable for the time. The result was surely spectacular.

Today, we can only imagine what the gardens looked like. Greek historian, Strabo wrote that there were “abundant springs of water both for domestic purposes and for watering gardens.” But through science, we can get an even better glimpse. Botanical studies have revealed that the garden was highly ornate with both grass and palm species. Fruit trees might have also grown there, though that’s not clear yet.

The pool was a monster, bigger than an olympic pool today. Just imagine, coming from days or weeks of walking in the desert and seeing a huge swimming pool in front of you – one can only imagine the kind of impact such a sight made.

Petra’s inhabitants showed their mastery of rock and water. With impressive buildings carved in stone and an unimaginable garden, it was one of the gems of the ancient world, until the second century C.E. After being conquered by the Romans, Petra’s importance began to wane, as the sea became the favored trade route. It finally succumbed sometime during the 8th century but even today, we’re awed