by Mihai Andrei
in Archaeology, Science
Reading Time: 2 mins read
A A
Share on FacebookShare on TwitterSubmit to Reddit

A colossal sculpture, both in physical and artistic terms, was unearthed by archaeologists at the Tayinat Archaeological Project (TAP) excavation site in southeastern Turkey. Aside from this new treasure, they also found a large semi-circular column base, ornately decorated on one side. The pieces are part of a monumental gate complex from the upper citadel of Kunulua, capital of the Neo-Hittite Kingdom of Patina (ca. 1000-738 BC). 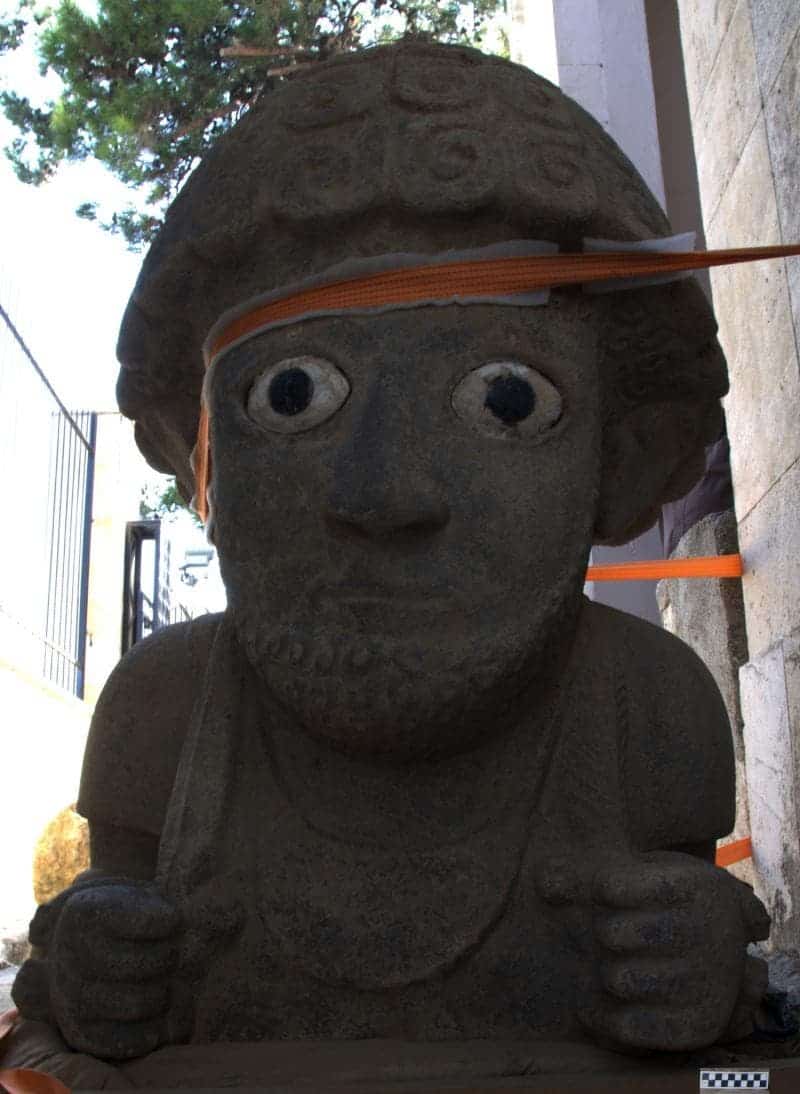 “These newly discovered Tayinat sculptures are the product of a vibrant local Neo-Hittite sculptural tradition,” said Professor Tim Harrison, the Tayinat Project director and professor of Near Eastern Archaeology in the University of Toronto’s Department of Near and Middle Eastern Civilizations. “They provide a vivid glimpse into the innovative character and sophistication of the Iron Age cultures that emerged in the eastern Mediterranean following the collapse of the great imperial powers of the Bronze Age at the end of the second millennium BC.”

The head and the torso of the figure are almost intact, standing at 1.5 metres in height, but the rest of the body is missing, indicating a total body length of 3.5 to four meters. The figure is bearded, with beautifully preserved eyes made from black and white stones, while the hair represents a carefully ornate series of curls. The arms are extended forward from the elbow, wearing bracelets decorated with lion heads, and while the right hand holds a spear, the left one holds a shaft of wheat.

The second sculpture is a large, semi-circular column base, about one meter in height and 90 centimeters in diameter, lying on its side right next to the statue. It has a winged bull carved on one side, flanked by a sphinx on its left. The right side of the column is undecorated though, indicating that it stood next to a wall on that side.

“The two pieces appear to have been ritually buried in the paved stone surface of the central passageway through the Tayinat gate complex,” said Harrison. The complex would have provided a monumental ceremonial approach to the upper citadel of the royal city. Tayinat, a large low-lying mound, is located 35 kilometres east of Antakya (ancient Antioch) along the Antakya-Aleppo road.

Via University of Toronto