Why people get stuck with boring jobs: they choose money, before satisfaction

by Tibi Puiu
in Psychology, Research
Reading Time: 4 mins read
A A
Share on FacebookShare on TwitterSubmit to Reddit 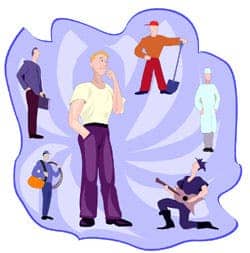 A common lament we often encounter in today’s society is just how boring some people’s jobs are. We all have friends, or you might be one of these folks yourself, who always seem to complain how unsatisfying their workplace is, even though they might have other options at their disposal. A recent study found that typically, confronted with the choice, people would rather pick  a boring job over a stimulating one if they perceive they aren’t being paid enough for extra effort.

The findings were made by Duke University Fuqua School of Business marketing professor Peter Ubel and David Comerford, an assistant professor at Stirling University. The two call this phenomenon “effort aversion” – people’s choice of putting  forth less effort even if it means less personal satisfaction.

“We found even when an effortful job would be more interesting and enjoyable than one requiring less effort, people might price themselves out of the job market because they feel their effort needs to be rewarded,” Ubel said.

The hypothesis was tested in two experiments. In the first, 144 participants were asked to fill in a questionnaire  offering the choice of two short-term jobs at a cultural festival. Participants could either choose to be an usher (which would require publicizing the event, cleaning up after and escorting performers) or a monitor (which would only require alerting a security guard if needed.) Results showed that while most people (82 percent) preferred the job of usher, 36 percent would only take the job if it paid more than the monitor.

“Ask someone which of two jobs they like better, and they will often pick the more interesting job, even if it requires more mental or physical effort,” Comerford said. “But ask them how much the two jobs should pay, and now that their mind is focused on wages, they often conclude that all that extra effort ought to be rewarded, otherwise they will take the boring job.”

In the second study, 74 graduate students agreed to take part in a short film. They could choose the role of worker (which would require doing a word puzzle for almost five minutes) or on-looker (sit and watch others.) Again, results showed most people found the role of worker more enjoyable (66 percent), but of that group  only 18 percent agreed to solve the word puzzles without regard to whether they would receive more money than the onlookers.

If people think they’re paid less than they should for an exciting job, they’ll pick a boring job that pays better instead

In the second experiment, 74 graduate students were told they could part in a short film. When asked to choose between the role of a worker, implying they had to do a word puzzle for almost five minutes for the scene, and an on-looker, who just had to sit and watch others, again most people chose the less interesting role, despite preferring taking on the worker role (66 percent). Only 18 percent agreed to solve the word puzzles without regard to whether they would receive more money than the onlookers.

“What these two studies showed us is if you put the issue of wages in front of people, all of a sudden that becomes a  primary concern. They are focusing on what they perceive as fair compensation, rather than nonmonetary aspects of the job, such as social value or even whether the job is interesting,” Ubel said.

So, why do people get stuck with boring jobs? Well if you find great satisfaction in being a painter, but earn more as a desk clerk at the bank, you might loose sight of what’s truly important and choose material comfort. Essentially, according to the findings, people seem to concentrate more on material gain, and less on job satisfaction when confronted with the choice. Were people to concentrate more on their own enjoyment while performing a job, instead of financial gain, people all over the world might be happier.

The researchers actually sought to see whether “effort aversion” could be overcome. Eighty people surveyed at airports were asked about a hypothetical film-shooting scenario similar to the previous study. Some were asked to rate the roles of workers versus on-looker based on enjoyment before considering wages.  A second group was asked to set wages for the jobs before thinking about the enjoyment.The people who considered enjoyment first were more likely to pick the job they said they would enjoy most. Though almost irrelevant from a statistical standpoint, this third experiment hints that simply thinking about enjoyment before wages might help people overcome their effort aversion.

“I can see lots of good reasons why your gut would tell you not to work unless you get paid more than you’d get for doing nothing,” Comerford said, “but the lesson I take from these studies is that that reaction risks leaving you bored and unhappy.”

In the end, the answer to why people get stuck with boring jobs might be a lot simpler: most people are scared and lazy. It can be very comfortable to have less responsibility, avoid complex work and complain all the time to your friends. Fear and laziness is what actually separates most people from truly great men who have left their mark in history, keeping them from reaching their full potential. I may be oversimplifying, granted, and I’m definitely guilty of being judgmental but this is just my personal opinion.

Findings appeared in the journal Science.