To Curious Aliens, Earth Would Stand Out As Living Planet

by Mihai Andrei
in Research, Space
Reading Time: 2 mins read
A A 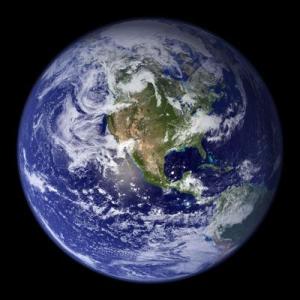 Most people have a problem in looking at a problem from a different point of view than their own. Curiously enough the our species has the same problem; scientists have found more than 240 planets in the past two decades, none likely to support Earth-like life. But just recently did the whole astronomic community as a rather intriguing question: How would Earth appear to aliens? But what if aliens were hunting life outside their own planet? Armed with telescopes only a bit bigger and more powerful than our own, could they peer through the vastness of space and lock in onto Earth as a likely home to life? That in fact would be quite likely.

That’s the question at the heart of paper co-authored by a University of Florida astronomer that appeared recently in the online edition of Astrophysical Journal. The answer, the authors say, is a qualified “yes.”

“They would only be able to see Earth as a single pixel, rather than resolving it to take a picture,” said Eric Ford, a UF assistant professor of astronomy and one of five authors of the paper. “But that could be enough for them to identify our planet as one that likely contains clouds and oceans of liquid water.”

This research may sound as a joke but in fact is has a very serious basis and it analyzes a very serious issue. For humans or curious aliens, observing planets is challenging for a number of reasons – habitable planets all the more so. The biggest part of planets found so far are way bigger than our own and they are somewhat similar to Jupiter, a profoundly uninhabitable place with no solid surface and atmosphere composed largely of hydrogen and helium. But astronomers are starting to figure out how they could find planets much closer to Earth’s size and proximity to the sun.