by Mihai Andrei
in Astronomy, News
Reading Time: 3 mins read
A A
Share on FacebookShare on TwitterSubmit to Reddit 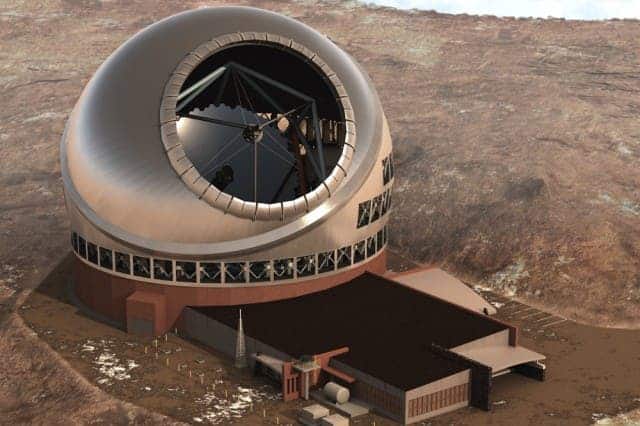 After years of planning and engineering schemes, the construction of the $1.4 billion telescope in Hawaii has finally begun. The unimaginatively named Thirty Meter Telescope (TMT) will provide astronomers with unparalleled power to observe the stars – it will have a resolution 10 times better than Hubble.

The telescope is designed for observations from near-ultraviolet to mid-infrared (0.31 to 28 μm wavelengths). Furthermore, the telescope will feature a system to eliminate the blur caused by the Earth’s atmosphere and would be capable of investigating a broad range of astrophysical problems. Among the main aims of the telescope are dark energy, dark matter and tests of the Standard Model of particle physics, characterization of the first stars and galaxies in the Universe, exoplanet discovery and characterization, connections between supermassive black holes and galaxies, physics of planet and star formation and even the search for life on planets outside the Solar System.

But the planning phase was not without opponents. Some viewed the placement of the telescope on top of Hawaii’s Mauna Kea volcano has some local residents up in arms. Some native Hawaiians believe the volcano to be sacred ground, and as such, nothing should be built ontop of it. Protesters were able to hold up the groundbreaking ceremony briefly by blocking a road, but plans will go on and everything seems set to launch the telescope in 2022. Even though personally I am a supporter of the project, I find it sad that this is yet another one of those ‘tradition versus technology’ cases in which the tradition is ignored. However, finding a similar location to Mauna Kea would be practically impossible.

The telescope will measure (as you’ve already guessed) a total reflective surface that’s 30 meters (about 98 feet) in diameter. But the innovation is a system of mirrors called an “adaptive optics” system. The problem with most telescopes on Earth is the atmosphere – you have a thick blanket of air (the atmosphere), with turbulences, humidity, wind patterns and more which can interfere with the observations. For this reasons, astronomers have tried to send telescopes into outer space, above the atmosphere and eliminate such turbulences. But this system could eliminate (at least in some cases) the need to do that. The adaptive optics system will measure atmospheric turbulence by observing a combination of natural (real) stars and artificial laser guide stars. Based on these measurements, a pair of deformable mirrors will be adjusted many times per second to correct optical wavefront distortions caused by the intervening turbulence. Essentially, the mirror changes its own shape in real time to compensate for any atmospheric turbulence.

This technology is not entirely new – it has been pioneered in the twin Keck telescopes, which are also located near the top of Mauna Kea.

But TMT isn’t the only huge telescope being planned. A pair of projects in the Chilean Andes are already being planned – the two telescopes will have 24 and 39 meter light-collecting surfaces, and each telescope is expected to have different focus areas and be equipped differently. But since the aim of these telescopes is to investigate the entire Universe, I think there’s easily enough room for all three.