You just gotta love European engineers! They’re about to blast away the top of a Chilean mountain to create a site for the European Extremely Large Telescope. This telescope will, for the first time, allow astronomers to directly observe planets outside the solar system. 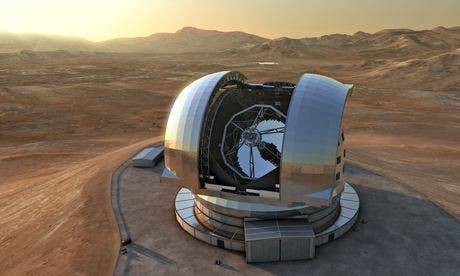 The telescope will be called the European Extremely Large Telescope… which is really not the most original name they could have thought of – but that’s not really relevant. The telescope will also allow astronomers to probe the earliest stages of the formation of planetary systems as well as look for water and organic molecules in proto-planetary discs around stars in the making.

Ok, so building a really large telescope which will provide huge scientific benefits is laudable… but why blow up a mountain top – and in Chile, of all places? The answer is pretty simple – it’s all about water, according to Cambridge University astronomer Professor Gerry Gilmore.

“The atmosphere here is as dry as you can get and that is critically important. Water molecules obscure the view from telescopes on the ground. It is like trying to peer through mist – for mist is essentially a suspension of water molecules in the air, after all, and they obscure your vision. For a telescope based at sea level that is a major drawback.”

There’s a reason for blowing up the mountain top too – it’s not just engineers having fun.

“However, if you build your telescope where the atmosphere above you is completely dry, you will get the best possible views of the stars – and there is nowhere on Earth that has air drier than this place. For good measure, the high-altitude winds blow in a smooth, laminar manner above Paranal – like slabs of glass – so images of stars remain remarkably steady as well.”

The telescope’s “eye” will be 39.3 meters in diameter and will gather 15 times more light than any telescope existing at the moment (according to Wikipedia); there are other good telescopes being built at the moment, but this one is hands down the most promising. An indication of the E-ELT’s potential is provided by ESO astronomer Linda Schmidtobreick.

“There are fundamental issues that only a telescope the size of the E-ELT can resolve,” she says. “Its mirror will have a surface area 10 times bigger than any other telescope, which means it will take a 10th of the time to collect the same amount of light – ie the same number of photons – from an object compared with these other instruments.”

For her, as well as other researchers, gathering the light is extremely important. For example, Schmidtobreick studies the so-called cataclysmic pairs: systems of two stars in which one is pulling vast amounts of gas (hydrogen) from the other. This project can lead to huge thermonuclear eruptions, which are incredibly short (sometimes less than 30 seconds).

“With current instruments, it can take minutes or hours to collect light from these objects, which is too long to resolve what is happening,” says Schmidtobreick. “But with the E-ELT, we will be able to study many, many more cataclysmic variables because we will be able to collect significant amounts of light from them in seconds rather than minutes or hours and so will be to resolve their behaviour.”

But this is also important in the search for extraterrestrial life – more light means you can study smaller things. Simone Zaggia, of the Inaf Observatory of Padua is more interested in this aspect.

“At present, our biggest telescopes can only spot really big exoplanets, giants that are as big as Jupiter and Saturn,” he says. “But we really want to know about the smaller worlds that make up the solar systems in our galaxy. In other words, we want to find out if there are many Earth-like planets in our part of the universe. More importantly we want to find out if their atmospheres contain levels of oxygen or carbon dioxide or methane or other substances that suggest there is life there. To do that, we need a giant telescope like the E-ELT.”

I’m really looking forward to the development, but this over 1 billion euro telescope will only start functioning in the early 2020s.

Image and idea source: The Guardian.