Tesla’s Autopilot reduces car accidents by 50%. Are you ready to give up the wheel?

During a meeting with Norway’s Minister of Transport and Communications, Tesla's CEO Elon Musk claimed that since 'autopilot' was rolled out, there have been 50% fewer car accidents.

by Dragos Mitrica
in News, Technology
A A

Tesla’s autonomous driving features aren’t perfect, but they already seem safer than the average driver. During a meeting with  Norway’s Minister of Transport and Communications, Tesla’s CEO Elon Musk claimed that since ‘autopilot’ was rolled out, there have been 50% fewer accidents involving the company’s cars.

The claim is based on data fed by Tesla cars which drove 47 million miles with the autopilot feature enabled. Anything that triggers an airbag is counted as an “accident”.

“The probability of having an accident is 50% lower if you have Autopilot on. Even with our first version. So we can see basically what’s the average number of kilometers to an accident – accident defined by airbag deployment. Even with this early version, it’s almost twice as good as a person.”

Before you get excited, remember that Tesla’s autopilot doesn’t make its cars self-driving. For now, you can only use it on highways and drivers may be prompted at any time to take control of the vehicle if the road surface changes or there’s not enough data to make a safe decision. A completely self-driving Tesla will likely soon surface, but right now no Tesla car is self-driving.

Musk is boasting, but even if autopilot can reduce accidents by 20 percent that’s still a lot.  In 2010, there were an estimated 5,419,000 crashes in the United States, killing 32,999 and injuring 2,239,000. A lot of lives could be saved even if a fraction of vehicles are self-driven. A car that’s riddled with sensors and sophisticated algorithms will have better ‘reflexes’ than the average driver and can thus dodge an unpredictable road maneuver.

A robot, it seems, is more responsible than a human as far as driving is concerned. Are drivers ready to renounce control to their new overlords, though? 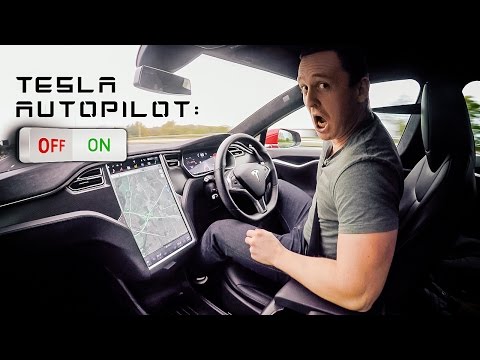