The new generation of robots is softer and gentler.

by Mihai Andrei
in Inventions, News, Robotics, Technology
A A

Scientists have already developed strong, capable robots. The next step is creating delicate, nimble robots — and that’s exactly what Colorado researchers have accomplished. They’ve outfitted robots with muscle-like features, offering them not only the power to manipulate heavy objects but also the gentleness to do so without damaging them.

Already, robots are being used in a myriad of industries, mostly for repetitive tasks which require a lot of power. But, they’re typically rigid and apply a fixed amount of force. Meanwhile, gentler robots and robots which can apply varying force can also be useful in a number of tasks, from picking fruit to helping elderly or impaired people. So scientists from the University of Colorado in Boulder wanted to explore the softer side of these machines.

“We want to do the opposite,” said Christoph Keplinger, assistant professor in CU’s Department of Mechanical Engineering. “We want robots who will be our friends and help us.”

They sought inspiration from biology, focusing on two technologies:

Pneumatic actuators are powerful and relatively easy to fabricate, but they can be bulky and their movements tend to be rigid. Meanwhile, dielectric elastomer actuators are much faster and smoother, but they’re more prone to failure. Keplinger and his colleagues joined the two technologies in an innovative project — it’s like mixing the strength of an elephant with the delicacy of a hummingbird, they say.

“Think about a hummingbird and the high speed of its wings,” Keplinger said. “Then think about the power of the trunk of an elephant. At the same time, think about an octopus arm, which is extremely versatile and can squeeze through tiny spaces.”

This field of research is called “soft robotics” and their project is named “hydraulically amplified self-healing electrostatic” — or HASEL. HASEL eschews the traditional idea of a metallic droid, replacing it with a soft shell capable of mimicking the expansion and contraction of biological muscles. To make things even better, this robot can not only be built from cheap, readily available materials, but it’s also self-repairing.

Basically, the donut-shaped elastomer shell is filled with an insulating liquid (such as canola oil). It’s then hooked to a pair of electrodes and, when a voltage is applied, the liquid is displaced, shifting the shape of the soft shell. When the voltage is turned off or reduced, the grip is released. In terms of general physics, it works very much like a biological muscle. Through sensors, HASEL can also pick up environmental cues, making it even more lifelike. 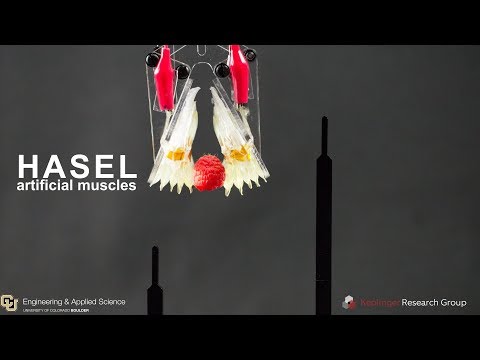 “We draw our inspiration from the astonishing capabilities of biological muscle,” said Christoph Keplinger, senior author of both papers, an assistant professor in the Department of Mechanical Engineering and a fellow of the Materials Science and Engineering Program.“HASEL actuators synergize the strengths of soft fluidic and soft electrostatic actuators, and thus combine versatility and performance like no other artificial muscle before.

Keplinger details his project in a pair of papers published in Science and Science Reports. They built three designs, and to show them off, they had the robots complete tasks which require both strength and tenderness. For instance, the robots were able to lift heavy weights, but they were also able to handle delicate objects such as a raspberry and a raw egg.

“We can make these devices for around 10 cents, even now,” said Nicholas Kellaris, also a doctoral student in the Keplinger group and the lead author of the Science Robotics study. “The materials are low-cost, scalable and compatible with current industrial manufacturing techniques.”

Robert Shepherd, a soft robotics expert at Cornell University, who was not involved in the study, told ScienceMag that this is a very big step forward, while Bobby Braun, dean of CU Boulder’s College of Engineering and Applied Science said that the research is “nothing short of astounding.”

Considering the performance, low price, and versatility of these robots, we could expect them to make a real impact on society in the near future.

“We’d like to do this as soon as possible to start making an impact on people’s lives,” Keplinger concludes.