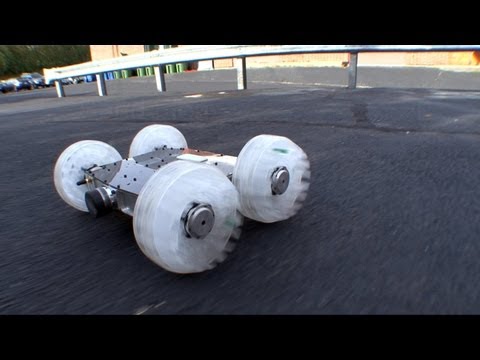 Boston Dynamics is at the forefront of robotic research and development at the moment, fact very easily attested just by checking out a few of their amazing robots developed during the past year alone, like the cheetah-bot which broke the robot land speed record, the gecko-like bot which can climb walls effortlessly or the terrifyingly realistic Petman. The company’s latest creation, military-orientated like most of their projects, has been recently presented to the public via the video demonstration at the beginning of this article.

Dubbed the Sand Flea, this is a robot that simply loves to jump around. Weighing in at five kilograms (11 pounds), and incredibly short in size, the robot can jump around obstacles as tall as 10 meters (30 feet), all with incredible precision – its developers claim it can accurately jump through a window two stories up. When the Sand Flea needs to jump, it gets off its four wheels and positions itself in a launch position. A piston at the end of the robot is fired and propels the robot across great distances. The piston’s action is fueled by CO2, and Sand Flea can make 25 jumps in a row before it needs to refill.

When it’s flying, a gyro stabilization system helps it land smoothly and keep its camera level for surveillance images – the purpose for which it was developed, aimed at gathering intelligence in conflict zones, like Afghanistan. Maybe a “tail” would’ve made for a better stabilizing feature.