Ground robots are currently typically deployed by the US military in various explosive-ordinance-disposal missions. However, robots are currently unable to fulfill their potential across a greater range of missions mostly due to issues regarding mobility and manipulation.

However, DARPA is trying hard to face those obstacles, and when they team up with Boston Dynamics, you just know something’s gonna happen – and it did. In the video you can see below, the ‘cheetah’ robot breaks the speed record, galloping at 18 miles per hour. You might be surprised that the previous record, 13.1 mph was set in 1989. The robot is running all by itself – the wires you see are just used to keep it centered on the treadmill. 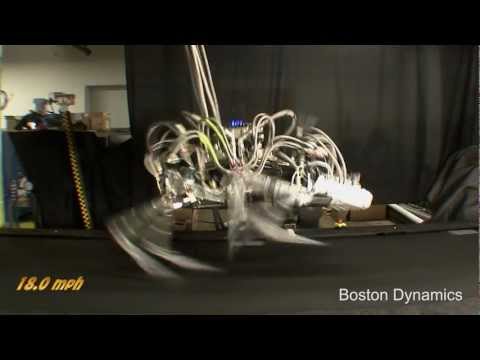 “This robot is galloping,” said Boston Dynamics president Marc Raibert. “It’s the first time we’ve had a robot that gallops.”

The whole thing was developed as part of the Pentagon’s Maximum Mobility and Manipulation (M3) program, which aims at developing mobility for robots. As such, they pursue four areas of development: tool design, improvement of production methods and processes, optimization in control of robot mobility and manipulation, and prototype demonstration.

However, this is just the beginning, and researchers expect the robot to run much faster as advancements continue to be made.