It’s a well known fact that snakes can “fly”, gliding even more than 100 meters sometimes from branch to branch, but exactly how they are able to achieve such a remarkable feat has dazzled researchers for quite a while. A new study using an unprecedented filming, 3D modeling, real and fake snakes showed how snakes move and angle to obtain the optimum lift. 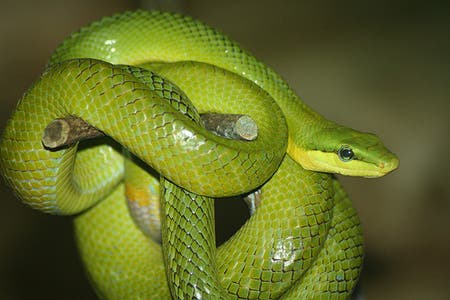 In order to do this, biologists analyzed five species of Chrysopelea, observing how they twist their ribs and flatten their body in mid air. This is not quite an uncommon feat among other species, but few of them achieve the height of the Chrysopelea.

“Other snakes flatten their bodies as well,” said Jake Socha, a biologist at Virginia Tech. For example, king cobras can flatten their hoods for defensive purposes.

The team filmed the snakes while they were gliding and compared them to the 3D models they created, not only to see how they jump, but also how they can prepared their descend and achieve such an amazing precision. They found that snakes position their bodies at 25-degree angles as they fall, with their heads up and tail down. Researchers compared this to when you stick your hand out of a moving car and tilt your palm slightly upward.

“You hand is now angled to the oncoming flow, and that angle helps push the air down,” Socha said. “As a consequence, your hand goes up.”

“Our research suggests that, with an S configuration, [the snake] gets more lift than it would if it were a straight snake,” said Socha, whose initial flying-snake research was funded by the National Geographic Society’s Committee for Research and Exploration. (The Society owns National Geographic News.)

The study may also have a military importance, though this wasn’t the original purpose; for example, understanding how snakes “fly” may lead to better gliding air vehicles.

“This is amazingly interesting and curious, and it’s not at all clear how it works or how it could have evolved,” he said. “I’m just trying to answer these basic questions.”