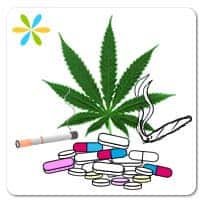 A new study which capitalized on an extensive ongoing survey, shows that children with high IQs, especially girls, are more likely to indulge in illicit drug use in their 30’s than people with lower IQs.

Dr. James White of Cardiff University and his team of researchers used data gathered from the British Cohort Study, an ongoing social experiment first started in the 1970’s, which follows and surveys 8,000 individuals from their childhood to present day. The population based study examined lifetime drug use, socioeconomic factors and educational attainment. Factors such as social class and levels of depression were controlled for.

The data from the study shows that, by the age of 30, one in three men and one in six women had used marijuana in the previous years. As for cocaine,  the figures were 8.6 percent of men and 3.6 percent of women, with a similar pattern of use for the other drugs.

The participants had their IQ scores measured at age 5 and 10. Confidential psychological distress and drug use surveys were made for each participant at age 16, and 30. Assessed drugs included cannabis and cocaine, while for the most recent survey of 30 year olds, amphetamine and ecstasy had also been added.

When the researchers correlated IQ scores with drug use, a curious stat emerged. Men with high IQ scores at the age of five were around 50 percent more likely to have used amphetamines and ecstasy as adults, and the link becomes ever more evident when studying women. Seems women were more than twice as likely to have used cannabis and cocaine as those with low IQ score – despite fully understanding the negative effects of drug use.

“Although most studies suggest that higher child or adolescent IQ prompts the adoption of a healthy lifestyle as an adult, other studies have linked higher childhood IQ scores to excess alcohol intake and alcohol dependency in adulthood,” says Dr White.

“Although it is not yet clear exactly why there should be a link between high IQ and illicit drug use, previous research has shown that people with a high IQ are more open to new experiences and keen on novelty and stimulation.”

The report was published in the latest issue of Medical News Today.