by Mihai Andrei
in Geology, Studies
Reading Time: 3 mins read
A A
Share on FacebookShare on TwitterSubmit to Reddit

A new massive research from SMU’s Geothermal Laboratory, funded by a grant from Google.org has documented significant geothermal resources across the US (especially in the West), a resource that has the potential, with today’s technology, to produce over three million megawatts of green power – that’s 10 times more than coal plants currently produce. 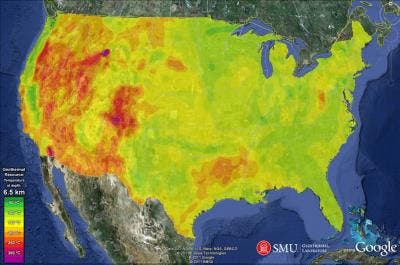 Sophisticated geophysical mapping clearly demonstrates the vastness of this green resource that we are only beginning to use on a massive scale; a resource that is realistically extractable using today’s standards. The study, led by SMU Hamilton Professor of Geophysics David Blackwell and Geothermal Lab Coordinator Maria Richards confirmed and refined the areas which are capable of supporting large scale geothermal energy production, under various geologic conditions. These areas are mostly located in the western third of the United States.

The study itself is just massive; in order to achieve these results, they analyzed over 35.000 sites – twice the number used for the biggest previous study, which led to improved detail and a better contour at a regional level. They also used additional data obtained mostly from oil and gas drilling, which further improved the quality of the dataset.

Until now, geothermal energy extraction has been limited almost exclusively to the western past of the US, in areas which are tectonically active. For example, Geysers Field north of San Francisco is home to more than a dozen large power plants that can produce geothermal energy for at least 40 years from now. Newer drilling and extraction technologies make it available in different, more diverse areas. However, there is still much to improve in this field.

“This assessment of geothermal potential will only improve with time,” said Blackwell. “Our study assumes that we tap only a small fraction of the available stored heat in the Earth’s crust, and our capabilities to capture that heat are expected to grow substantially as we improve upon the energy conversion and exploitation factors through technological advances and improved techniques.”

1) Low Temperature Hydrothermal; energy requires less heat to be produced, thus increasing the possibility of usage in areas where the water temperature varies between from 90 to 150 degrees Celsius. In the US, this works especially fine in Alaska, Oregon, Idaho and Utah.

2) Geopressure and Coproduced Fluids Geothermal; oil and natural gas are produced together with electricity generated from hot geothermal fluids, from the same well. Systems are installed or being installed in Wyoming, North Dakota, Utah, Louisiana, Mississippi and Texas.

3) Enhanced Geothermal Systems (EGS); areas with low fluid content and temperatures can now be injected with other fluids; other reservoir techniques can also be applied.

If you want to see this latest study, download the latest version of Google Earth and open this file. I highly recommend it.