Global warming will lead to less snow fall in the world

by Tibi Puiu
in Environmental Issues, Studies, World Problems
Reading Time: 2 mins read
A A
Share on FacebookShare on TwitterSubmit to Reddit

A new climate model has predicted dramatic snow fall decline worldwide as a result of increased atmospheric carbon dioxide in the next 100 years. Many regions in the world depend on fresh water as a result of snow melt, which means if the study’s predictions hold that dire consequences to the biosphere and climate balance await. 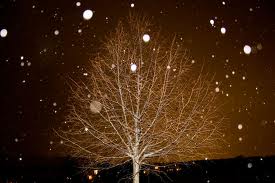 It’s rather difficult to imagine less snowfall in the future, considering some regions of the world today still battle it even though winter is traditionally on retreat. The US east coast, for instance, has been recently hit by a vicious snow storm known as the Winter Storm Nemo, whose strong winds and heavy snow has forced many local residents to remain indoors.

Scientists at the  National Oceanic and Atmospheric Administration (NOAA) Geophysical Fluid Dynamics Laboratory (GFDL) predict, however, based on a new climate model that increased CO2 levels in the atmosphere will lead to a dramatic reduction in snow fall in the world. Only the world’s arctic regions and high altitudes will be spared, and actually receive more snowfall.

Their predictions are for a hundred years from now, and come as  a consequence of warming due to a doubling  of atmospheric carbon dioxide. Today CO2 in the atmosphere is 40% greater than levels registered in the mid 19th century – when the industrial revolution boomed and with it fossil fuel usage – and is expected to double by the turn of this century, if current trends continue.

According to the model, in the US at least, the biggest declines in snowfall will take place along the northeast coast, in the mountainous west and in the Pacific Northwest. Polar regions, however, will face opposite effects. Here, along with high altitude areas like the Himalayas, snow fall is expected to increase because the warmer air will be able to accommodate more moisture.

“Strong snowstorms thrive on the ragged edge of temperature — warm enough for the air to hold lots of moisture, meaning lots of precipitation, but just cold enough for it to fall as snow,” said Mark Serreze, director of the National Snow and Ice Data Center. “Increasingly, it seems that we’re on that ragged edge.”

The researchers admit that their results mesh other studies that anticipated declines in snowfall for the Earth’s highest altitudes, as opposed to the current model. However, so far snow fall readings are in line with the NOAA predictions.