by Tibi Puiu
in Remote sensing, Space, Studies
Reading Time: 3 mins read
A A
Share on FacebookShare on TwitterSubmit to Reddit 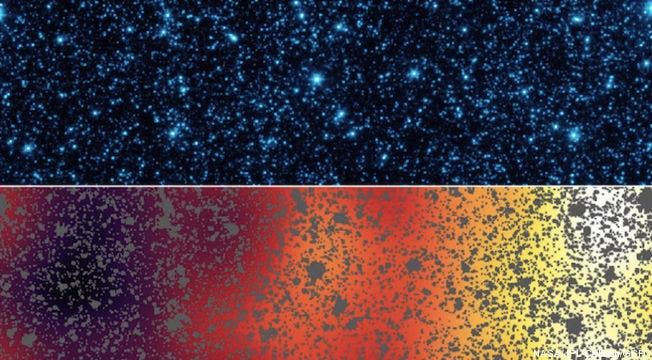 First discovered in 2005, and then studied in more depth since 2007, NASA scientists have finally isolated the ethereal glow thought to originate from the very first objects in the Universe with the highest precision yet.

As seen in the image above, depicted in orange and red, the ‘lumpy’ infrared glow was observed using the ever faithful Spitzer Space Telescope, a remarkable device which has so far delivered numerous valuable scientific data about the cosmos. The scientists suggest the glow was given off by wildly massive stars or voracious black holes. The exact source can not be pinpointed with the available technology today, but what seems rather certain is that it originated from the very first objects in the Universe 13 billion years ago, shortly, in cosmic time that is, after the “Big Bang“, which is theorized to had occurred 13.7 billion years ago.

“All we can say is that these sources do not exist among the known galaxy populations, which have been observed to very early times (large distances),” said Alexander “Sasha” Kashlinsky, a NASA scientist who led the team that made the discovery. “This likely puts us within the first half-giga-year of the universe’s evolution, the epoch of first stars.”

The intriguing glow, known as cosmic infrared background, was first sighted by Spitzer in 2005, but only in recent years was the telescope able to isolate it. Scientists directed Spitzer at a region of interest in the sky — near the constellation Boötes — and studied it for over 400 hours, after which they carefully subtracted all of the known stars and galaxies in the images.

What remained were faint patterns of light with several telltale characteristics of the cosmic infrared background.

“These objects would have been tremendously bright,” says Alexander Kashlinsky of NASA’s Goddard Space Flight Center.

“We can’t yet directly rule out mysterious sources for this light that could be coming from our nearby universe, but it is now becoming increasingly likely that we are catching a glimpse of an ancient epoch. Spitzer is laying down a roadmap for NASA’s upcoming James Webb Telescope, which will tell us exactly what and where these first objects were.”

Their first light would have originated at visible or even ultraviolet wavelengths and then, because of the expansion of the universe, stretched out to the longer, infrared wavelengths observed by Spitzer. The telescope, however, has a short-wavelength view and thus can not answer unambiguously whether these objects were stars, black holes, galaxies or some previously unknown celestial formation. The new study measures this cosmic infrared background out to scales equivalent to two full moons – significantly larger than before. They plan to explore more patches of sky in the future.

“We hope to achieve this in the coming years (or months),” Kashlinsky said.

Such investigations would have access to a broader picture, and thus answers as well, once with the deployment of the highly anticipated James Webb Space Telescope, slated for launch in 2018. The James Webb Telescope is a massive, cutting-edge space telescope designed to orbit 1 million miles from Earth, where it would observe the mid-infrared portion of the electromagnetic spectrum. This would make it capable of gazing through some of the earliest forms of the Universe.

“This is one of the reason’s we are building the James Webb Space Telescope,” says Glenn Wahlgren, Spitzer program scientist. “Spitzer is giving us tantalizing clues, but James Webb will tell us what really lies at the era where stars first ignited.”

The findings were reported in the journal The Astrophysical Journal.