Our brain is a wonderful thing – the pinnacle of evolution on our planet – and there is still so much we don’t understand about it! For example, a team of researchers recently concluded that for some people, the brain tends to maintain a positive outlook on life, even through hard times and problems, and it does this by rejecting negative thoughts. 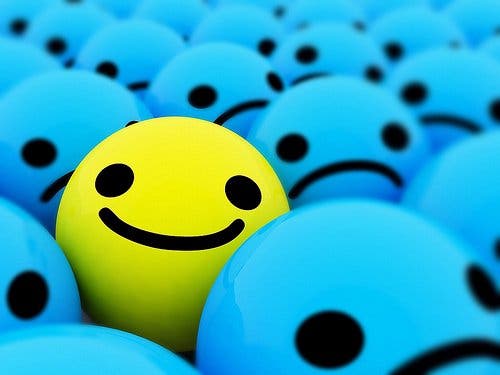 The study, published in Nature Neuroscience suggests the brain is very good at processing good news, and, in some cases, eliminatig the bad ones entirely. However, even though we are basically talking about a brain flaw which prevents people from having a realistic view of the world, there are significant health benefits associated with this situation.

Scientists at University College London claim that some 80% of all people should be labeled as optimists, even though they don’t consider themselves as such. In order to reach this conclusion, they asked test subjects how likely they believe unfortunate events (such as severe disease or divorce) to be. After answering, the subjects were told the statistical probabilities, and then, they were asked the same questions again.

Dr Tali Sharot, who was the lead researcher, gave the example of the risk of cancer being set at 30%. If, for example, the subject believed the risk to be at 40%, then by the end of the experment, they would have lowered the odds to about 31%. However, if the patient originally thought their risk was 10%, they only marginally increased their risk – they “leaned a little bit, but not a lot”.

Dr Chris Chambers, neuroscientist from the University of Cardiff, said:

“It’s very cool, a very elegant piece of work and fascinating. “For me, this work highlights something that is becoming increasingly apparent in neuroscience, that a major part of brain function in decision-making is the testing of predictions against reality – in essence all people are ‘scientists’. “And despite how sophisticated these neural networks are, it is illuminating to see how the brain sometimes comes up with wrong and overly optimistic answers despite the evidence.”

Optimism seems to be generally good for the health, but then again, the bad side is the tendency to underestimate the risks.