by Mihai Andrei
in Environment, Studies
A A 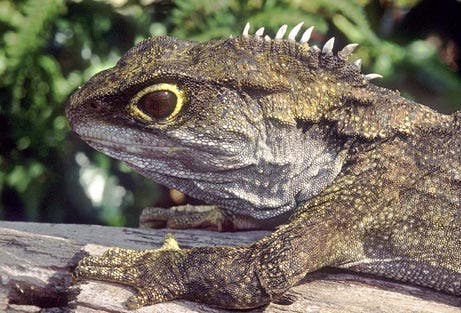 The tuatara is not an iguana, it’s not a lizard, and it is very, very different than any other reptile alive today on Earth. In fact, recent studies suggest that it’s pretty different from any other vertebrate. It’s home is in New Zealand, which is known for eccentric life forms of all kinds: the kiwi, with long whiskers and feathers just like fur, the kakapo, the parrot that can’t fly and looks like an owl, and the giant weta, a cricket as big as your fist. However, as amazing and special as these animals are, they fade in comparison to the tuatara.

About 80 million years ago, the supercontinent Gondwana split up, leaving life on this paradise island evolutionary separated from the rest of the world. The tuatara is about 16 inches long, and it’s practically a living fossil – it hasn’t changed significantly in hundreds of millions of years. It has a third eye, the legendary but unexplained pineal eye, located on the forehead and used for registering light intensity and regulating body temperature. 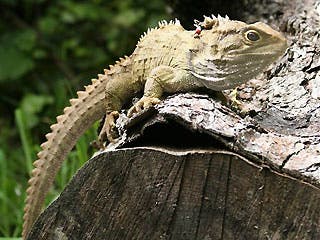 But what is extremely weird is that a few regions of the tuatara DNA are evolving at an incredible speed, probably with the fastest mutation rate ever in vertebrates. The rapidly changing DNA sequences are limited to so-called neutral regions of the tuatara’s DNA, and affect rather fillings and not the basic “blueprint” of the tuatara. They are also very different from reptiles too.

“Their biology is quite distinctive,” said Charles Daugherty of the Allan Wilson Center for Molecular Ecology and Evolution at Victoria University of Wellington in New Zealand. “They have a unique type of hemoglobin, and their enzymes are set to function at lower temperatures than in most reptiles.” As a result, tuataras remain active at night, and in weather just a few degrees above freezing, said Dr. Daugherty, “at temperatures at which most reptiles couldn’t survive.”

But the tuatara gets even more awesome. They routinely live to 100 years, and often go above 150 or even 200; they also live it up – females can reproduce up until 80-100 years. They’re also mean and like to show off, and even fight when necessary

“They have crests they can inflate, to make them look big, and they stand very tall and start mouth-gaping at each other,” said Dr. Godfrey. “If one male doesn’t get the message, it will escalate into a physical fight.” They tear at each other’s crests and toes, they trade parasites. “During mating season, you can see the bright orange patches of mites on their necks,” said Dr. Godfrey. “It’s quite spectacular.”

Today, there are less than 50.000 tuataras, all of which are considered to be a national treasure.