Scientists to recreate the perfume worn by pharaoh Hatshepsut

by Mara Bujor
in Archaeology, Research, Studies
Reading Time: 3 mins read
A A
Share on FacebookShare on TwitterSubmit to Reddit 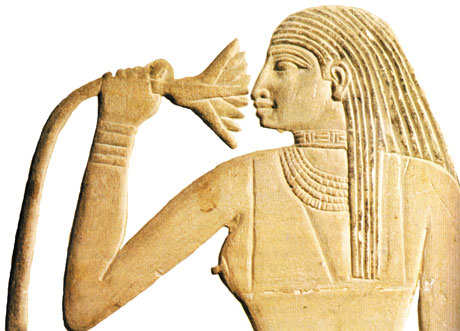 An exquisite fragrance has always been considered to be a status symbol especially because of the difficulties encountered in order to create a good one. However, this is far from being a characteristic of our times; in ancient Egypt, this was taken to an entirely higher level: wearing a certain perfume was the sign of having a godly origin. And now, thanks to archaeological findings and state-of-the-art technology we will be able to “smell” how it was to be an Egyptian queen.
By using a computer tomograph researchers at Bonn University’s Egyptian Museum were able to discover some traces of a fluid inside a perfectly-preserved flacon dating from 3,500 years ago, when pharaoh Hatshepshut was ruling . So the chances of recreating the perfume are very high.
Pharaoh Hatshepsut was a powerful woman, very eager to gain even more power. She ruled around the year 1479 B.C. and she was only supposed to be a representant of her son, Thutmose III, who was aged 3 at the time. However, she stayed in power for 20 years, by continuously keeping her son away from the throne.
Going back to the subject of perfumes, it seems that the purpose of the scent was to be another reminder of her important role, especially as it contained incense- the scent of gods. This idea seems not to be far-fetched at all as the pharaoh is known to have traveled to Punt (modern Eritrea), from where the Egyptians used to import goods such as ebony, gold and incense too. Entire incense plants were brought, which were planted next to Hatshepsut’s funeraty temple.
The flacon  has an inscription of her name, so most likely it  belonged to her; the precios relic is now to be examined by the scientists at the Radiology Department of the University, this being a worldwide premier. As the residues can be clearly seen in the x-ray photographs, it will be now up to the pharmacologists to study and, if possible recreate it, 3500 years after the pharaoh’s death.
Hatshepsut died in 1457 B.C. and analysis of her mummy showed that she had been aged between 45 and 60 at the time of her death and that she had also been suffering from being overweight and having diabetes, cancer, arthritis and osteoporosis. For safety, she was laid to rest in the tomb of her wet nurse until 3300 years later, in 1903, when the 2 mummies were discovered by Egyptologist Howard Carter. More than 100 years would pass until the mummy was finally identified by using DNA anlysis in 2007. Tuthmose III seems not to have been too sad about his mother’s death as during his reign all proof of her existence was destroyed.
Source: University of Bonn.
ADVERTISEMENT
ADVERTISEMENT
Tags: hatsheputx-ray
ShareTweetShare