Photograph of nanobots killing off cancer

by Mihai Andrei
in Biology, Health & Medicine, Research
Reading Time: 2 mins read
A A
Share on FacebookShare on TwitterSubmit to Reddit 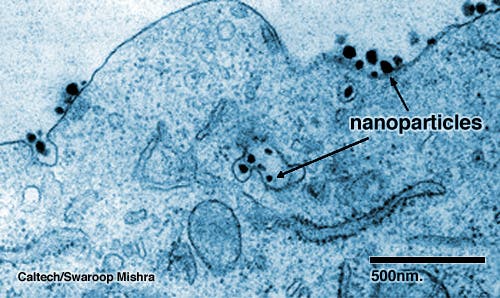 Take a really good look at this picture; you may just be looking at the very thing that will defeat cancer. The black dots are nanobots, practically delivering a killing blow to the cancerous cells, and only to those cells. According to Mark Davis, head of the research team that created the nanobot anti-cancer army at the California Institute of Technology, the above mentioned technology “sneaks in, evades the immune system, delivers the siRNA, and the disassembled components exit out”.

According to the study published in Nature, you can use as many of these nanobots as you wish, and they’ll keep on raiding and killing the cancerous cells and stoping tumours.

“The more [they] put in, the more ends up where they are supposed to be, in tumour cells.”

The technology has its roots on RNA interference, a discovery that brought Andrew Fire and Craig Mello the Nobel Prize in 2006.

“RNAi is a new way to stop the production of proteins,” says Davis. “What makes it such a potentially powerful tool, he adds, is the fact that its target is not a protein. The vulnerable areas of a protein may be hidden within its three-dimensional folds, making it difficult for many therapeutics to reach them. In contrast, RNA interference targets the messenger RNA (mRNA) that encodes the information needed to make a protein in the first place. In principle,” says Davis, “that means every protein now is druggable because its inhibition is accomplished by destroying the mRNA. And we can go after mRNAs in a very designed way given all the genomic data that are and will become available.”

This is just the first demonstration CalTech performed, but it went on perfectly, and the results are quite promising. We will hold our fingers crossed.