by Tibi Puiu
in Physics, Research, Technology
Reading Time: 4 mins read
A A
Share on FacebookShare on TwitterSubmit to Reddit 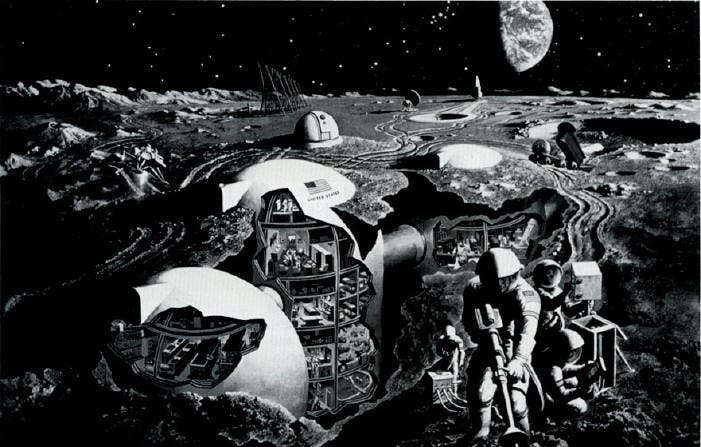 As space agencies around the world, predominantly NASA, are considering building outposts outside Earth for the most likely far distant future, various difficulties need to be cared for. One of the most bugging and precarious one is the matter of energy generation. Without energy, you don’t have electricity to power labs, green houses, you can’t have oxygen – there’s no way to maintain life. It’s a no-brainer, I know, but it’s a point that needs to be taken very seriously, and scientists have been hard at work devising power generation solutions for some time now.

Everything seems to be pointing to a sole solution, with almost no viable alternative next to it – nuclear fission plants. Yes, tomorrow’s Moon or Mars bases will be most likely powered by nuclear energy. It’s incredibly efficient, it’s safe and, equally important, it’s cheap.

RELATED: Japan plans a Moon base by 2020, built by the robots, for the robots

“The main point is that nuclear power has the ability to provide a power-rich environment to the astronauts or science packages anywhere in our solar system and that this technology is mature, affordable and safe to use,” says James E. Werner of the Idaho National Laboratory

A nuclear power plant in your briefcase

Outer space fission nuclear technology will be a lot different from your conventional behemoth nuclear power plants you still today on Earth, though. Conventional nuclear power plants span across hectares of land and need huge cooling tanks. Nuclear fission power reactors designed with cutting-edge technology can be sized to as little 1 1/2 feet wide by 2 1/2 feet high, not bigger than a carry-on suitcase and can provide a humangous power compared to its size, making them ideal for extraterrestrial outposts.

Works on such reactors is already in place, as Werner and his colleagues from the DOE Idaho National Laboratory are painstakingly designing and modeling the reactor, develop fueling solutions, as well as a small electrical pump for the liquid metal cooled system. A working demonstration is scheduled for 2012, part of a project jointly made possible by the National Aeronautics and Space Administration (NASA) and the U.S. Dept of Energy.

Nuclear fission is attained when the nucleus of an atom is split into smaller parts by introducing a neutron. In the case of uranium, the most common radioactive material used, these are binary. The nuclear reaction obtained leads to a tremendous burst of energy which is then converted into mechanical energy, before finally being stored as electrical energy.

Some of you might ask why not use solar energy? It can’t get cheaper than that. Well, solar power, while used today to  power every commercial satellite hovering Earth, as well as the International Space Station, isn’t that efficient and has a highly limited power generation capability, at least with present solar cells.

“The biggest difference between solar and nuclear reactors is that nuclear reactors can produce power in any environment,” Werner explained. “Fission power technology doesn’t rely on sunlight, making it able to produce large, steady amounts of power at night or in harsh environments like those found on the Moon or Mars. A fission power system on the Moon could generate 40 kilowatts or more of electric power, approximately the same amount of energy needed to power eight houses on Earth.”

With fission technology to power an outpost, you could build one even in a crater. While the physics behind nuclear fission is the same for the huge power plants on Earth and the high-tech reactors planed for lunar outposts, there are a number of important discrepancies between them, size being the most evident.

“While the physics are the same, the low power levels, control of the reactor and the material used for neutron reflection back into the core are completely different,” Werner said. “Weight is also a significant factor that must be minimized in a space reactor that is not considered in a commercial reactor.”

If the technology can be successfully tested, it will definitely provide the forefront for future space exploration programs, used to propel man made objects or man himself much farther into space than ever before.