by Tibi Puiu
in Astronomy, Remote sensing
Reading Time: 2 mins read
A A
Share on FacebookShare on TwitterSubmit to Reddit 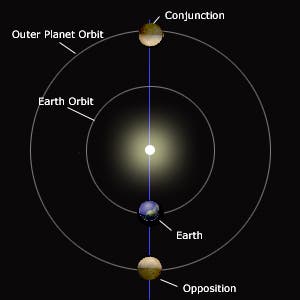 The term Mars opposition basically refers to a geometric event. Thus on the 3rd of March, Mars will appear exactly opposite the sun in Earth’s sky, 180 degrees away from it, as well as come at one of the closest distances to Earth, making it easy observable even with the naked eye.

This event takes place every two years and two months, so if you’ve got some astro-gear stacked up somewhere in your attic, now’s a good a time as any to try it out again. Tonight, Mars will be about 62.6 million miles away from Earth, making it almost impossible to miss with the naked eye, even in the brightest city skies. Amazingly enough, however, there was a previous opposition that was even more spectacular. If some of you might remember, on Aug. 30, 2003, the last favorable opposition date, Mars was positioned at half the distance it is now from Earth, around ~30 million miles away – effectively making it appear twice as big as it will be tonight.

As the sun will set in the west, look in the opposite direction to the east for a pale red color – it should appear visible about an hour after sunset. For some reason, if you are unable to catch the sight or if you’re looking for magnified view, but don’t have a telescope, you can check out the online Slooh Space Camera stream. At the stream, this Saturday night, which will be hosted by some astronomy experts, you’ll be able to have an enchanting view of the planet from a variety of observatories including those in Arizona and the Canary Islands. The observations will be so focused that you’ll be able to pick out surface features such as canyons, volcanoes and polar caps on the red planet’s surface.