by Mihai Andrei
in Space, Studies
Reading Time: 1 min read
A A 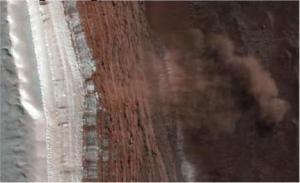 For a whole lot of time Mars has fascinated scientists, which during the time made some crazy theories, of whch some included martians living there, or a lost civilization that used to live there, and that kind of stuff. Now, they are sure that nothing else except microorganisms live there, but who knows what tomorrow will bring?

Anyway, meanwhile it remains a source of fascinating phenomenae and we have a lot to learn from that planet. A NASA spacecraft in orbit around Mars has taken the first ever image of active avalanches near the Red Planet’s north pole. The image shows tan clouds billowing away from the foot of a towering slope, where ice and dust have just cascaded down.

“We were checking for springtime changes in the carbon-dioxide frost covering a dune field, and finding the avalanches was completely serendipitous,” said Candice Hansen, deputy principal investigator for HiRISE, at NASA’s Jet Propulsion Laboratory, Pasadena, Calif.

“We don’t know what set off these landslides,” said Patrick Russell of the University of Berne, Switzerland, a HiRISE team collaborator. “We plan to take more images of the site through the changing Martian seasons to see if this kind of avalanche happens all year or is restricted to early spring.”