Not enough reasons to give up fatty food? Well, it disrupts your biological clock too!

by Mara Bujor
in Discoveries, Health & Medicine, Research, Studies
A A 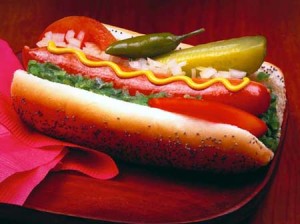 Eating too much fatty food does not only lead to being overweight and related diseases, but it can also disturb the balance of one’s circadian rhythms, which means your 24-hour biological clock will stop working thee way it should.

Dr. Oren Froy and his colleagues of the Institute of Biochemistry, Food Science and Nutrition at the Hebrew University’s Robert H. Smith Faculty of Agriculture, Food and Environment from Jerusalem found a link between a high-fat diet and disturbances of the biological clock after experimenting on mice.

These disturbances can lead to obesity, psychological and sleep disorders and even cancer because the activity of hormones and enzymes involved in metabolism is affected dramatically.

Even though light is the main factor which influences one’s circadian cycle, diet appears to have a strong effect on it too.

The researchers wanted to find out how important diet is for the way adiponectin works, this being a substance which is highly important for metabolism because it increases fatty acid oxidation and promotes insulin sensitivity.

The mice were fed differently, some with highly-fat food, while others received a low-fat diet. This was followed by a fasting day, while adiponectin activity was verified. The mice who had eaten low-fat food had a normal circadian rhythm of life while the others showed a phase delay as the way proteins involved in fatty acid metabolism worked was affected.

The researchers suggest that eating too much fatty food leads to obesity also because it affects the daily rhythm of clock genes. This may also explain the disruption of other systems connected to metabolic diseases, such as blood pressure levels and the sleep/wake cycle.
Source: The Hebrew University of Jerusalem