The world’s smallest “wedding rings” are made from DNA

by Mihai Andrei
in Nanotechnology, Research
Reading Time: 2 mins read
A A
Share on FacebookShare on TwitterSubmit to Reddit

DNA nanotechnology is one of the most exciting branches of nanotechnologies, especially because it uses the ability of natural DNA strains to self assembly. Prof. Alexander Heckel and his doctoral student Thorsten Schmidt of Goethe University 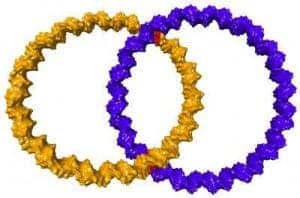 set out with exactly that thought in mind when they created two DNA rings with the size of only 18 nanometers and interlock like two links in a chain. Schmidt, who got married when he was working on these rings stated that they may very well be the smallest wedding rings in the world.

Aside from being awesomely cool, the rings are extremely important from a scientific point of view as well. They represent a milestone in nanotechnology, not fixed formations, but can be freely pivotable, which makes them perfect for being integrated in a machinery; but that is still far away.

“We still have a long way to go before DNA structures such as the catenan can be used in everyday items,” says Prof Alexander Heckel, “but structures of DNA can, in the near future, be used to arrange and study proteins or other molecules that are too small for a direct manipulation, by means of auto-organization.” This way, DNA nano-architectures could become a versatile tool for the nanometer world, to which access is difficult.

Catenan, refers to the structure, from the Latin word “catena”, which means chain. In order to get an idea about the size of these rings, it would take about 4000 of them to achieve the diameter of a human hair. All I can say is I wish Prof. Schmidt all the best in his marriage, as well as in his research !