MIT research might help UAVs fly with the agility of hawks

by Tibi Puiu
in Animals, Research, Robotics, Technology
Reading Time: 3 mins read
A A
Share on FacebookShare on TwitterSubmit to Reddit

Current unmanned aerial vehicles (UAV), commonly referred to as drones, are packed with state of the art technology, but despite this they’re not very smart as far as maneuvering around obstacles is concerned. Birds, for instance, can fly through forests at incredible speeds, traveling through out the whole woods  at times, with no risk of collision what so ever. MIT scientists are now determined to apply the principles which allow birds to evade obstacles at high speeds to the drones of the future. Be afraid! 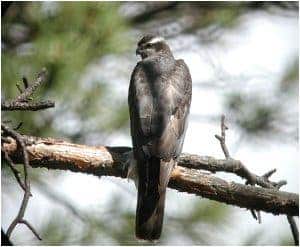 When navigating around obstacles, UAVs have to fly at rather low-speeds, since they have to be able to stop within their sensors’ view.

“If I can only see up to five meters, I can only go up to a speed that allows me to stop within five meters, which is not very fast,” says Emilio Frazzoli, an associate professor of aeronautics and astronautics at MIT.

The northern goshawk is a fierce predator that swirls through threes at lightning speed to catch its pray, mostly small mammals. To reach these great speeds, while dodging stones, trees and branches at the same time, the hawk has a sense of maximum theoretical speed it can reach, and stays within these limits, the researchers say. It does this by scanning the density of obstacles, like the number of trees divided across a surface in the forest, and thus it can know for sure that if it goes through an opening through the trees over which it currently has no field of vision, it will be safe to fly nevertheless since it will find another one. The researchers found that there exists a speed below which a bird — and any other flying object — has a fair chance of flying collision-free. If this limit is crossed, the bird or aircraft is sure to collide with an obstacle.

The same principles applies to downhill skiers as well.

“When you go skiing off the path, you don’t ski in a way that you can always stop before the first tree you see,” he says. “You ski and you see an opening, and then you trust that once you go there, you’ll be able to see another opening and keep going.”

Frazzoli and PhD student Sertac Karaman managed to mathematically describe both the bird’s and skier’s intuition after they developed models of various forest densities, calculating the maximum speed possible in each obstacle-filled environment. They then adjusted the model to represent varying densities of trees, and calculated the probability that a bird would collide with a tree while flying at a certain speed.

The scientists’ research is still in this theoretical phase, and the researchers are now working with Harvard to study hawks in the forest environments and see if the theoretical model is precise enough. Next, Frazzoli wants to see how close humans can come to such theoretical speed limits, and is developing a first-person flying game.

“What we want to do is have people play, and we’ll just collect statistics,” Frazzoli says. “And the question is, how close to the theoretical limit can we get?”