by Mihai Andrei
in Biology, Research
Reading Time: 3 mins read
A A
Share on FacebookShare on TwitterSubmit to Reddit

The Mariana trench is the deepest point on Earth; now, an international team of researchers found that the very bottom of the Mariana Trench, which lies almost 11 km beneath the surface of the Pacific Ocean, has high levels of microbial activity. 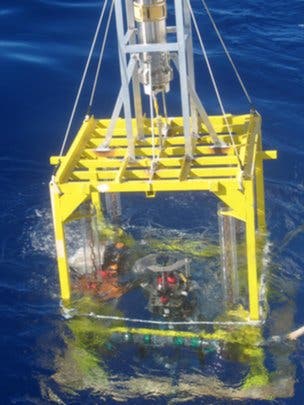 No more than 30 years ago, we had a very different idea about where microbes can live in. Since then, researchers have found them living in freezing conditions, almost boiling conditions, extreme pressure, extreme chemical conditions, extreme toxicity, and many, many more surprising places. Finding bacteria in this completely dark, extremely pressured underwater canyon 11 km deep just brings more colour to that picture.

Dr Robert Turnewitsch, one of the authors of the paper from the Scottish Association for Marine Science, said:

“The deepest parts of the deep sea are certainly not dead zones.”

In 2010, biologists sent an unmanned submersible down to the Mariana Trench, where it collected samples of the murky sediment that covers the seafloor. Analyzing the samples, they found a very diverse bacterial fauna, that somehow manages to breathe oxygen much like we do.

“These microbes, they respire as we do. And this oxygen consumption is an indirect measurement of the activity of the community.”

What’s interesting is that these primitive (but very well adapted), single-celled organisms were twice as active at the bottom of the trench than they were half distance in – at about 6 km deep. This happens because a very high amount of decayed, decomposing matter falls down to the bottom of the ocean, where it basically becomes a royal feast for these microbes.

“The amount of food down there and also the relative freshness of the material is surprisingly high – it seems to be surprisingly nutritious,” said Dr Turnewitsch.

As a matter of fact, the amount of organic material found at the bottom of the trench is so high that it could actually play a role in the carbon cycle, therefore regulating the planet’s climate.

“The fact that large amounts of organic matter that contain the carbon accumulate and are focused in these trenches also means they play an important role in the removal of carbon from the ocean and the overlying atmosphere. The Hadal trenches may play a more important role in the global marine carbon cycle than was previously thought.”

Recently, in a highly publicized science stunt, film director James Cameron made the dive to the bottom in a one-man-submarine, becoming the first person to have visited this deep spot for 50 years. Working with researchers at the Scripps institute, he reported that the bottom of the trench looks like a barren desert (doh!). Researchers also found giant amoeba and shrimp-like creatures called amphipods.