Tesla reveals new robot snake that will charge your car

by Henry Conrad
in Inventions, News, Technology
A A

Tesla released a video in which they unveil a crazy new prototype – a robotic arm that automatically moves and charges your car, without having to move a single finger. Elon Musk (Tesla’s founder, CEO and mastermind) teased the concept on Twitter back in December 2014, when he said the company is working on a snake-like charger “for realz”, and now… it’s finally here! 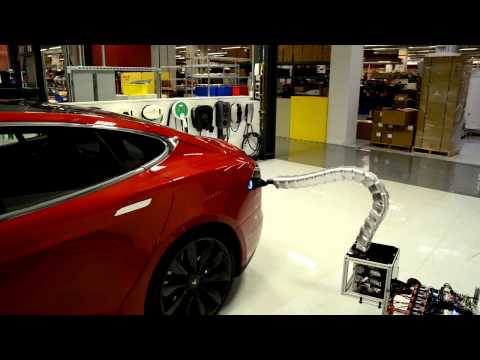 Ironically, Elon Musk has recently expressed worries that robots might one day overcome us, saying last year that robots could become dangerous in the next five to 10 years. Also, just last month, he joined the likes of Steve Wozniak and Stephen Hawking, signing an open letter calling for the end of an AI arms race. But the irony wasn’t lost on Musk, who tweeted:

I mean, it does look kind of eerie, doesn’t it? I’m absolutely thrilled to see this kind of technology developed, but it does look a bit scary.

In terms of a release date, nothing has been announced yet. The device is still in prototype stage, with no clear date in sight. Well, if robots do overcome us one day, we’ll know who to blame; but hey – at least we won’t have to charge our cars all by ourselves.