The first animal to curl into a ball

This defensive strategy has been used for a very long time, but if you were to take a guess, how long would do you think that time was? A thousand years, ten thousand years, one million years? According to a new fossil unearthed by paleontologists, the answer is at least 510 million years! 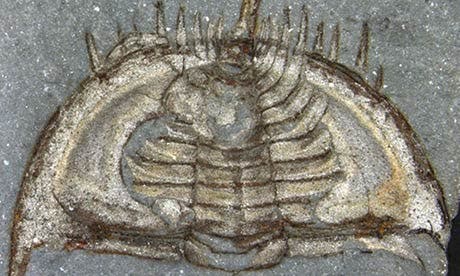 Trilobites are a well known fossil group which inhabited the planet up until approximately 250 million years ago; no larger than a finger tip, this fossil is the earliest creature known to curl up in a ball, thus pioneering one of the most successful defensive strategies on the planet.

The animal, which is one of the oldest trilobites ever discovered, was found with tail tucked to head in a lump of rock, after it was buried by a sudden mudslide more than half a billion years ago; judging by the fossil, the trilobite hasn’t really perfected this technique, as it left small spaces between the spines in the tail that left parts of the head exposed to danger – but it did a remarkably good job judging by the flexibility of its body. Javier Ortega-Hernández, a paleobiologist at Cambridge University discovered the first fossil, and it didn’t take him a lot to discover the second one.

The Cambrian is the first geological period of the Paleozoic Era, and it marked one of the most profound changes on Earth; previously, organisms were simple, and often unicellular. During the Cambrian, life simply exploded: multicellular life became common, environmental niches were filled, and the fight between predators and prey became much more fierce.

510 million years ago, emerging trilobites were faced with predators and other environmental dangers, and they started to experiment with various defensive techniques. To curl up in a ball proved highly successful, and it evolved to be used even in recent time,s by the ancestors of woodlice, armadillos, hedgehogs and pangolins.

“If you can roll up and protect your vulnerable legs its obviously going to be an evolutionary advantage and the trilobites were the first group of animals to solve this problem,” said Richard Fortey, the British paleontologist at the Natural History Museum in London. “It’s pretty obvious from this paper it was a trick they learned very quickly. They were already doing it by the early Cambrian. Running away is good, but standing your ground and protecting yourself is equally good. It’s been imitated in the animal kingdom many times,” he said.