Just one of the many reasons why I love geology – paleontologists have unearthed extraordinarily preserved fossils of a 520-million-year-old sea creature, one of the oldest animal fossils ever found. 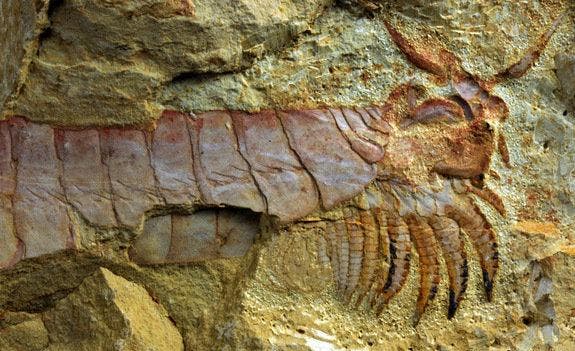 The animal in case is an arthropod called a fuxhianhuiid – you may remember him from this post, in which I described a lovely book on the Cambrian or from this one – where researchers believed him to be a missing link in insect evolution. The primitive creature had limbs under its head, and those limbs are very interesting for researchers.

“Since biologists rely heavily on organization of head appendages to classify arthropod groups, such as insects and spiders, our study provides a crucial reference point for reconstructing the evolutionary history and relationships of the most diverse and abundant animals on Earth,” said study co-author Javier Ortega-Hernández, an earth scientist at the University of Cambridge, in a statement. “This is as early as we can currently see into arthropod limb development.”

The findings were published in Nature.

The fuxhianhuiid lived in the lower Cambrian, and measured about 3 cm. They probably spent most of their day crawling on the sea bed and maybe swimming short distances. While other specimens have been found (most notably in China), previous fossils were found head-down, this being the first example in which the internal organs aren’t obscured. This is not only a spectacularly preserved fossil, but paleontologists hope it will provide new insight into how animals evolved.