Cracked metal fuses itself – pulling apart only makes it stronger

by Mihai Andrei
in Inventions, Materials
A A

It was a result so unexpected that MIT researchers first thought there was some kind of mistake – under certain conditions, putting a cracked piece of metal under tension (pulling it apart) has the reverse effect – causing the edge of the cracks to fuse together.

The surprising, counterintuitive find paves the way towards self healing metals that repair incipient damage before it has a chance to spread and become a major problem. The results were published in Physical Review Letters in a paper by graduate student Guoqiang Xu and professor of materials science and engineering Michael Demkowicz.

“We had to go back and check,” Demkowicz says, when “instead of extending, [the crack] was closing up. First, we figured out that, indeed, nothing was wrong. The next question was: ‘Why is this happening?’”

The answer, as it turns out, lies with how grain boundaries interact with cracks in the crystalline microstructure of a metal – in this case nickel, which is used in many superalloys used in extreme environments, such as in deep-sea oil wells. They then created a computer model which mimics the behavior of the microstructure and confirmed the observed behavior.

“We found that there is a mechanism that can, in principle, close cracks under any applied stress,” Demkowicz says.

When you go down to tiny crystalline dimensions, grains size and orientation affect many of their characteristics, such as strength and resistence to penetration. But under certain conditions, Demkowicz and Xu found, stress has a very strange effect:

“[it] causes the microstructure to change: It can make grain boundaries migrate. This grain boundary migration is the key to healing the crack,” Demkowicz says.

Self-healing metals have been studied intensively during this past decade, and researchers concluded that this kind of phenomenon occurs across a certain kind of boundary, one that affects a part of the grain, but not all of it. This creates a type of defect is known as a “disclination.” Disclinations were noticed 100 years ago, but were then considered to be little more than a curiosity. Even when the MIT researchers observed how the metal behave, it took them a while to understand what they’re dealing with – “it took us a while to convince ourselves that what we’re seeing are actually disclinations.” 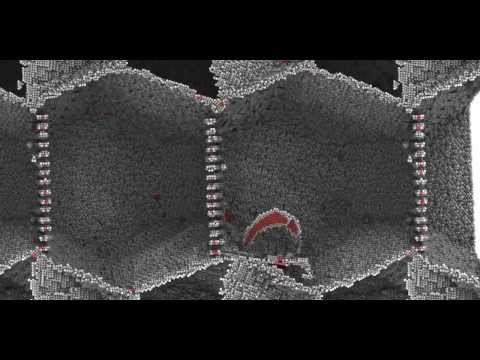 These defects have intense stress fields, which “can be so strong, they actually reverse what an applied load would do,” so in other words, if you apply a force to stretch them, instead of cracking even further, they heal.

“The stress from the disclinations is leading to this unexpected behavior,” he says.

Furthermore, this type of behavior could be applied to other kinds of failure mechanisms that affect metals, such as plastic flow instability. Now, researchers are working on ways to design metal so cracks would close and heal under loads typical of particular applications. Advanced techniques for manipulating alloy microstructures already exist, so this should only be a matter of time.

“That’s a field we’re just opening up,” Xu says. “How do you design a microstructure to self-heal? This is very new.”