Science has progressed amazingly in recent years, but a handful of spectacular inventions have remained lost to knowledge.

Science has progressed amazingly in recent years, but a handful of spectacular inventions have remained lost to knowledge. Whether it’s the Greek Fire, Roman Nanotechnology or a wonder-material desired by NASA, we’ve lost some great things along the way – these are just some of them.

You can’t really talk about lost inventions without mentioning Greek Fire; one of the greatest kept secrets of all time, Greek Fire was developed around 672, being used by the Eastern Roman (Byzantine) Empire. The empire was in dire straits, losing several painful naval battles in wars with the Arab countries. Then, as they found themselves overwhelmed by the vast Arab fleet with few chances of success, something almost magical happened. The Byzantine ships started spitting out their new fire through specially installed siphons and the fire started consuming everything in its path, burning even on water. Nothing could put it out, except sand, vinegar or urine – not something you’d find in large quantities on any ship.

The chronicler Theophanes was among the first to describe the Greek Fire, and he assigns the invention to Kallinikos, an architect (and presumably chemist) from the former province of Phoenice – then overrun by Muslims. However, this is a questionable account, and historian James Partington (among others) believes that the fire was not the creation of a single person, but rather invented by a team of chemists in Constantinopole who inherited scientific information from the Alexandrian school. Whatever the mixture included, it was probably quite complex as despite stealing or capturing some of it, other civilizations weren’t able to copy it.

Its significance was so huge that its discovery was ascribed to divine intervention. As for its composition and manufacture, historians are still debating that one. The only indication concerning its production comes from Anna Komnene, a Byzantine princess and scholar:

“This fire is made by the following arts. From the pine and the certain such evergreen trees inflammable resin is collected. This is rubbed with sulfur and put into tubes of reed, and is blown by men using it with violent and continuous breath. Then in this manner it meets the fire on the tip and catches light and falls like a fiery whirlwind on the faces of the enemies.”

Whatever it contained, Greek Fire burned on water, and forever changed the course of history.

A 1st Century Steam Engine, a Vending Machine and a Windwheel

The Heron Engine (also called an aeolipile) was a simple bladeless steam turbine, spinning when the central water container is heated. It produced torque from steam jets exiting the turbine, much like a rocket engine does today. Basically, water was heated in a simple boiler which was connected to the rotating chamber through a pair of pipes that also served as pivots for the chamber. Heron was quite generous and explained how one could make his own aeolipile. However, it wasn’t until 1698 that Thomas Savery patented the first steam engine of 1 horsepower (750 W). It had no piston or moving parts, only taps. Heron’s invention went unnoticed for over 1500 years.

As if that wasn’t enough, he also invented a vending machine, as described in his book “Mechanics and Optics”; a coin was introduced via a slot on the top of the machine and a fixed amount of holy water was dispensed. He also invented the first windwheel and consequently the first wind-powered organ, a programmable cart powered by a falling weight and created by himself an entirely mechanical play almost ten minutes in length, powered by a binary-like system of ropes, knots, and simple machines operated by a rotating cylindrical cogwheel. Many of his inventions were praised and immediately adopted but others, like the steam engine, were forgotten for centuries.

OK, so we lost some Antique inventions, but we’re not losing anything modern, right? Well… not quite. Maurice Ward was an amateur chemist who liked to tinker and invent things. In the 70s and 80s, he invented a material he called Starlite that was able to withstand and insulate from extreme heat. Several organizations were allowed to conduct test on its, but none were allowed to take samples for the fear of reverse engineering. Even NASA exhibited interest in the material but unfortunately, Starlite’s composition was kept a secret by Ward and after his passing, no one knew the secret.

Now I know what you’re thinking – this is another cook that claims he invented something… and didn’t. But the Atomic Weapons Establishment and ICI conducted tests on the material and confirmed the claims. Furthermore, a telling demonstration (see above) was shown on BBC. The inventor held a blowtorch directly above an egg covered in Starlite. After five minutes, the egg wasn’t even cracked, and when the inside was revealed, it hadn’t even begun to cook.

We’re sticking in the realm of wonder materials, but moving to something completely different: Damascus Steel has been the golden standard for blacksmiths for centuries.

Known by its distinctive pattern, extreme toughness and ability to be honed to extreme sharpness, Damascus Steel is a prime example of an invention lost due to a lack of source material. We’re pretty sure that the steel was made from ore deposits originating in India and Sri Lanka. The original steel was brought in from India to Damascus where local bladesmiths learned to make the highest quality steel – and swords. Damascus still was known and respected by blade wielders and smiths all around the world, but its production was brought to an end rather unceremoniously, as the raw material deposits ran out. The key trace impurities of vanadium and tungsten made the deposits so special, and a similar deposit has never been found.

It’s not clear why the technique was then forgotten or abandoned so fast. The very long trade route likely played a part. The technique for controlled thermal cycling after the initial forging at a specific temperature was also lost, and to this day, we don’t know how Damascus Steel swords were made. However, many modern blacksmiths have attempted to recreate it – they may have even gotten it right, but we’ll likely never know.

A colorful chalet now stored in the British Museum might not seem like much at a first glance, but believe it or not, it’s an example of ancient nanotechnology. The Lycurgus Cup looks differently depending on how light falls upon it. Lift from behind, it’s red, but lit from the front it’s green. It’s one of the most beautiful and well-decorated pieces of glass in all human history.

The effect was achieved by mixing tiny proportions of nanoparticles of gold and silver dispersed in colloidal form throughout the glass material. The exact process is still unknown, and was probably so complex that some historians believe it may have been achieved by mistake. However, it seems unlikely that glass-makers would leave anything to chance when creating a piece so intricate. 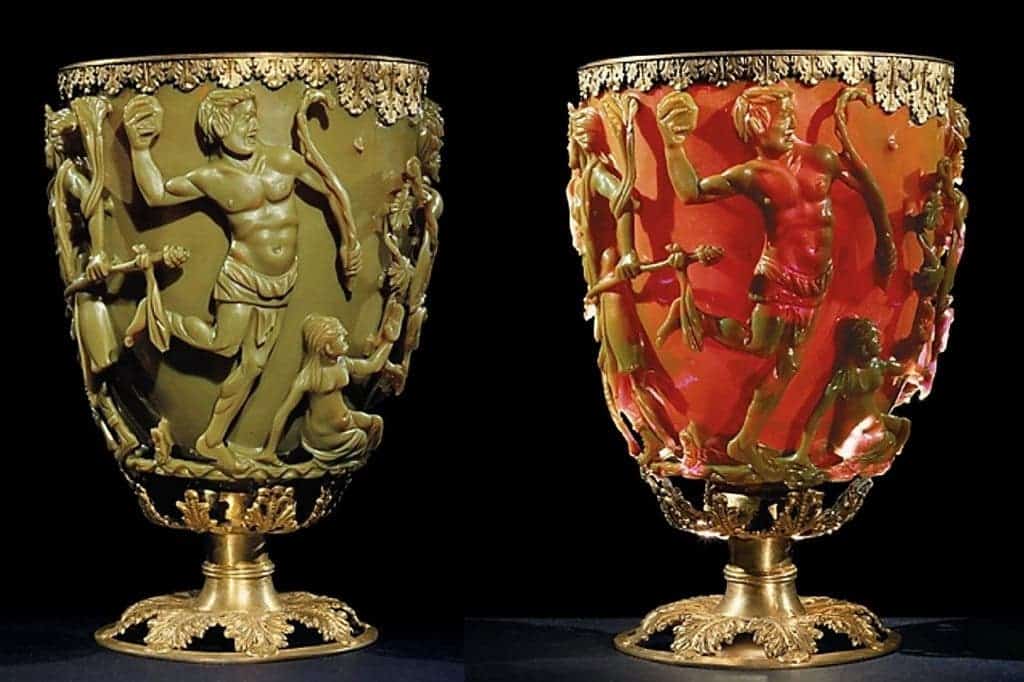 The cup is also an example of a complete Roman cage-cup, or diatretum, where many parts of the cage have been completely undercut to create space for the other decorations. Most cage-cups have an abstract geometric design, but here there is a clear composition of figures, showing the mythical king Lycurgus who tried to kill Ambrosia, a follower of the god Dionysus (Bacchus to the Romans). She was transformed into a vine which ultimately twined around the kind, restraining and eventually killing him. Dionysus and two other followers are shown here taunting the king. The cup is the “only well-preserved figural example” of a cage cup.

Muslin cloth was primarily manufactured in pre-British era India and Bangladesh and was exported throughout many parts of Asia and Europe. In essence a cotton fabric of plain weave, Muslin was traded by ancient Greeks and Romans from the East Indian port town Masulipatnam, known as Maisolos.

However, in British colonial times, the Bengali muslin industry was ruthlessly suppressed in order to favor textile imports from Britain. William Bolts, a Dutch-born eighteenth-century merchant active in India noted that  “instances have been known of their cutting off their thumbs to prevent their being forced to wind silk.” As a result, the quality and skill of producers greatly decreased and the ultimate process for Muslin cloth has been lost.

Over the past couple of centuries there have been several attempts to revive the industry and in 2013, the traditional art of weaving Jamdani muslin in Bangladesh was included in the list of Masterpieces of the Oral and Intangible Heritage of Humanity by UNESCO. However, the quality and finesse are not the same.

The Antikythera Mechanism is quite possible the most spectacular ancient artifact ever recovered. An ancient analog computer, it was designed to predict astronomical positions and eclipses for calendrical and astrological purposes, and even included features for the Olympiads – the ancient Olympic games.

The artifact was recovered in 1900 from the Antikythera shipwreck off the Greek island of Antikythera and was dated around 200 BC – over 2200 years ago! It could replicate the irregular motions of the Moon using two front dials had pointers for the Sun and Moon. Its quality and complexity are simply stunning, and nothing got even close to it until the 14th century when the first mechanical watches were being developed.

“This device is just extraordinary, the only thing of its kind,” said study leader Mike Edmunds of Cardiff University in the UK. “The design is beautiful, the astronomy is exactly right…In terms of historical and scarcity value, I have to regard this mechanism as being more valuable than the Mona Lisa.”

Not really an invention, Silphium was a plant used in classical antiquity both as a seasoning and as a medicine. Its importance was highlighted by the Egyptians and Knossos Minoans developing a specific glyph to represent the silphium plant, while Romans often said it was worth its weight in silver.

The plant was said to treat cough, sore throat, fever, indigestion, aches and pains, warts, and all kinds of maladies but its most cherished medicinal properties were as a contraceptive; its leaves were ground into a resin that was placed in the vagina as a spermicide. The plant went extinct due to an increase in demand, but some speculate overgrazing and increasing desertification in North Africa were also decisive.

To this day, biologists are still debating in what family this species belong and whatever medicinal properties it could have had are forever lost.