In a quest to make concrete not only more durable but also more sustainable, a group of geologists and engineers have found inspiration in the ancient Romans – whose imposing buildings have passed the test of time, surviving two millennia.

Geology and the Romans

Using classic microscopy, as well as the Advanced Light Source at Lawrence Berkeley National Laboratory (Berkeley Lab), a synchrotron light source, one of the world’s brightest sources of ultraviolet and soft x-ray beams, the team examined the fine scale structure of Roman concrete. They have described, for the first time, how the extraordinarily stable compound – calcium-aluminum-silicate-hydrate (C-A-S-H) – binds the material used to build the sturdy constructions.

Their work could improve the quality and sustainability of concrete, particularly in ocean environments. Modern concrete starts showing significant signs of degradation after approximately 50 years (quite often sooner). The method also leaves behind a smaller carbon footprint than the common counterpart.

Portland vs the Romans 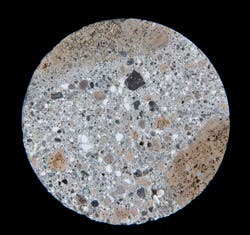 Portland cement (often referred to as OPC, from Ordinary Portland Cement) is the most common type of cement in general use around the world. The process for creating Portland cement requires fossil fuels to burn calcium carbonate (limestone) and clays at about 1,450 degrees Celsius (2,642 degrees Fahrenheit); about 7% of all CO2 emissions each year come from this activity. The production of lime for Roman concrete, however, is much cleaner – requiring about 1.000 degrees Celsius to be created (2/3 of its counterpart).

“Roman concrete has remained coherent and well-consolidated for 2,000 years in aggressive maritime environments,” said Marie Jackson, lead author of both papers. “It is one of the most durable construction materials on the planet, and that was no accident. Shipping was the lifeline of political, economic and military stability for the Roman Empire, so constructing harbors that would last was critical.”

The Roman Empire, arguably the most important Empire in all history, left behind numerous stunning constructions. Concrete was their material of choice, and the process was described around 30 B.C. by Marcus Vitruvius Pollio, an engineer for Octavian, who became Emperor Augustus. The key ingredient, which is not really a secret, is volcanic ash – which the Romans combined with lime to form mortar. They packed this mortar and rock chunks into wooden molds which they then immersed in seawater – harnessing the salt and water as important parts. This also led to the development of a very rare hydrothermal mineral called aluminum tobermorite (Al-tobermorite).

“Our study provided the first experimental determination of the mechanical properties of the mineral,” said Jackson.

So if their method was so good, why did it decline then?

“As the Roman Empire declined, and shipping declined, the need for the seawater concrete declined,” said Jackson. “You could also argue that the original structures were built so well that, once they were in place, they didn’t need to be replaced.”

While Roman concrete is incredibly durable compared to what we use today, it is pretty much impossible to use it nowadays; why? Because it takes too long to dry, and you can’t apply it in constructions where fast hardening is necessary.

But researchers are now finding ways to apply their findings on Roman concrete. Fly ash, one of the residues generated in combustion, is commonly used in the fabrication of concrete, and now, they are trying to prove that you can use volcanic ash instead of it – like the Romans did.

“There is not enough fly ash in this world to replace half of the Portland cement being used,” said Monteiro. “Many countries don’t have fly ash, so the idea is to find alternative, local materials that will work, including the kind of volcanic ash that Romans used. Using these alternatives could replace 40 percent of the world’s demand for Portland cement.”

They are trying to take the best of the 2 cements, and mix it together.