by Tibi Puiu
in Chemistry, Research, Studies
Reading Time: 2 mins read
A A
Share on FacebookShare on TwitterSubmit to Reddit

Atomic level imaging has come a long way in the past decade, and after scientists first managed to image molecular structure and even electron clouds, now a group of researchers at IBM Research Center Zurich have visually depicted how chemical bonds differentiate in individual molecules using a technique called non-contact atomic force microscopy (AFM).

In the image below one can clearly see detailed chemical bonds between individual atoms of a nanographene molecule or C60. In 3-D the molecule resembles a buckyball thanks to its football shape. 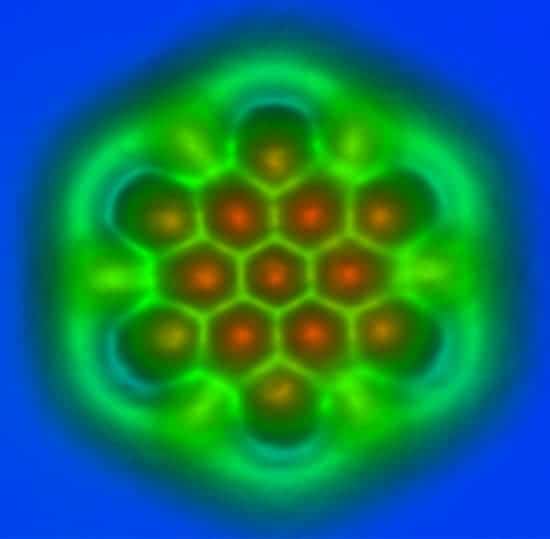 If you look closely you can see that some C-C chemical bonds are more highlighted than others. This is because in reality and practice, the  bonds between individual atoms differ slightly and subtly in length and strength, and for the first time we’ll now able to distinguish the different types of bonds from one another, visually.  The bright and dark spots correspond to higher and lower densities of electrons.

“In the case of pentacene, we saw the bonds but we couldn’t really differentiate them or see different properties of different bonds,” said lead author of the study Dr.  Leo Gross.

“Now we can really prove that… we can see different physical properties of different bonds, and that’s really exciting.” 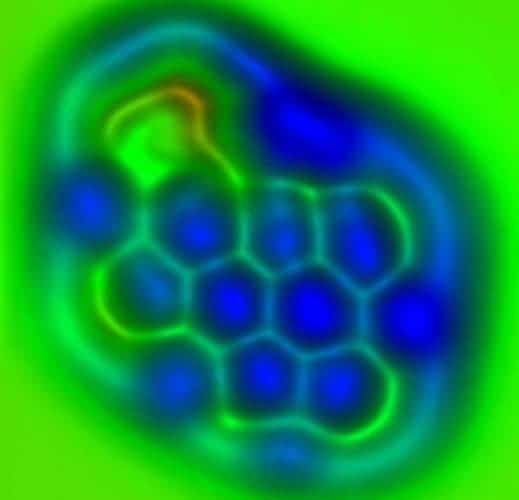 To create the images, the IBM researchers used an atomic force microscope with a tip that ended with a single carbon monoxide molecule. The CO molecule traces the image by oscillating between the tip and the sample. By measuring its wiggle and inter-molecular force  the AFM can slowly build up a very detailed image. The technique made it possible to distinguish individual bonds that differ by only three picometers, which is one-hundredth of an atom’s diameter.

“We found two different contrast mechanisms to distinguish bonds. The first one is based on small differences in the force measured above the bonds. We expected this kind of contrast but it was a challenge to resolve,” said IBM scientist Leo Gross. “The second contrast mechanism really came as a surprise: Bonds appeared with different lengths in AFM measurements. With the help of ab initio calculations we found that the tilting of the carbon monoxide molecule at the tip apex is the cause of this contrast.”