by Tibi Puiu
in Astronomy, Research, Technology
Reading Time: 3 mins read
A A
Share on FacebookShare on TwitterSubmit to Reddit 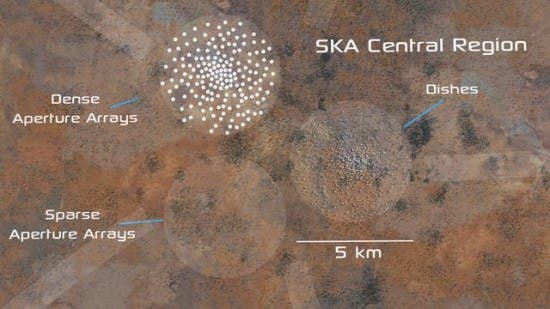 Backed by an international consortium, ten years from now the world’s largest and most sensitive radio telescope in the world will be built – the Square Kilometer Array (SKA). The project will consist in thousands of antennas displaced across thousands of miles, with a collecting area equivalent to one square kilometer (hence the name), that will hopefully help astronomers take a peek at the Universe’s closest moments after the Big Bang. However, such a grand scientific effort requires an equally humongous computing power, one that only seven million of today’s fastest computers could match. Recently, IBM has been granted the privilege to research the exascale super computing system to be integrated with the SKA, after it won the $42 million contract to work with the Netherlands Institute for Radio Astronomy (ASTRON).

IBM has thus marched for the Herculean task of developing a solution that will match SKA’s need for reading, storing and processing one exabyte of raw data per day. An exabyte is the equivalent of 1,000,000 terabytes or 12,000,000 latest generation iPods fully stored. If you didn’t quite get the scale involved, consider that one exabyte roughly equals two days worth of global internet traffic. Massive!

In Drenthe, Netherlands, ASTRON and IBM will look at energy-efficient exascale computing, data transport at light speed, storage processes and streaming analytics technology. “We have to decrease power consumption by a factor of 10 to 100 to be able to pay the power bill for such a machine,” said Andreas Wicenec, head of computing at the International Centre for Radio Astronomy Research in the state of Western Australia.

With this purpose in mind, the researchers are currently investigating advanced accelerators and 3-D stacked chips, architectures already proven to be highly energy-efficient at IBM labs. Also, they’ll have a look at how they can optimize huge data transfers by using novel optical interconnect technologies and nanophotonics. For the task at hand, 50 people, along with astronomers from 20 countries, will work to build the most complex super-computing system in the world for the next five years.

“To detect the signals, you really need a good antenna,” said Ronald Luitjen, an IBM scientist and data motion architect on the project. “It would be the equivalent of 3 million TV antennae dishes. This will be a unique instrument. Nothing else can do this kind of science.”

Radio telescopes in operation today are very powerful, but SKA will be in a whole different league. It will provide a real-time all-sky radio survey, on the lookout for some of the Universe’s most strange phenomena, unexplored with today’s technology. The telescope will be used to explore evolving galaxies, dark matter, look for complex organic molecules in interstellar space and study data from the Big Bang, the primordial cosmic event which gave birth to anything matter and anti-matter in the Universe more than 13 billion years ago. All these, you guessed it, require a huge computing effort – hopefully it’s to be served in the coming years before the SKA’s completion in 2024.

The $2 billion SKA will be located either in Australia/New Zealand or South Africa, with the latter being currently most favored. These regions were selected because of their low radio pollution. Nevertheless, the scientists involved in the project are looking at the bright side of the lengthy completion time. “It is really relying on the fact that technology is improving at a certain rate,” said Andreas Wicenec, head of computing at the International Centre for Radio Astronomy Research in the state of Western Australia. Well, how about quantum computing?

The SKA might hold the key to unlocking some of the Universe’s well kept secrets today, and, if anything, it will open a new era of computing, with ramifications in all spheres of science.