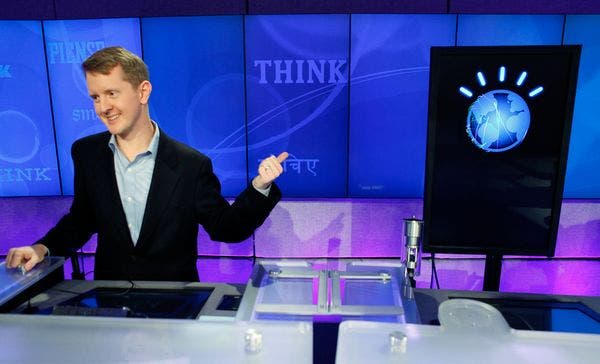 Yesterday night, the IBM developed supercomputer “Watson” won in a two-round Jeopardy contest, aired in three episodes,  against the two most famous, top-scouring human players, Ken Jennings (the longest consecutive winner in Jeopardy history) and Brad Rutter (most earnings won in the game). Who ever had the highest total score at the end of the two rounds would have won, along with a $1 million prize. However, it wasn’t even a close finish since Watson outran his competitors without too many difficulties, reminding us of another IBM supercomputer – IBM Deep Blue chess supercomputer that won against Garry Kasparov back in 1997.

Jennings turned out to be a stiff competitor for the supercomputer in the first round, but he soon lost momentum and saw himself heavily outranked by Watson at the end of round 2. “I for one welcome our new computer overlords,” wrote Jennings on his final Jeopardy question answer sheet.

“Playing against Watson turned out to be a lot like any other Jeopardy! game … Watson has lots in common with a top-ranked human Jeopardy! player: It’s very smart, very fast, speaks in an uneven monotone, and has never known the touch of a woman,” concluded the humorous Jennings.

Watson boasts a nearly 3,000-computer-processor “brain,” which can perform various tasks simultaneously, and has terrabites of information stacked up inside on a myrriad of fields, however speed and information is useless if you don’t know what to extract. Jeopardy can be very difficult for a computer because of the ambiguesly formulated quenstions, complex English and so on, which requires advanced human reasoning; Watson was implemented with an artificial reasoning algorithm developed over four years and millions of dollars.

“Each query or hypothesis returns a confidence score, and is further iterated to gather more evidence. The highest scoring answer wins. IBM has combined not just NLP and statistical NLP, but machine learning, a voting algorithm, a method of interpreting the questions and assessing them by formulating parallel hypotheses, and Hadoop and UIMA for preprocessing, as well as the usual search (Lucene and INDRI), deep text analytics, fuzzy matching software, and of course an in-memory caching system to save time in retrieval,” according to Sue Feldman.

“But there’s no shame in losing to silicon,” Jennings writes in an essay for Slate (great read!), “I thought to myself as I greeted the (suddenly friendlier) team of IBM engineers after the match. After all, I don’t have 2,880 processor cores and 15 terabytes of reference works at my disposal—nor can I buzz in with perfect timing whenever I know an answer. My puny human brain, just a few bucks worth of water, salts, and proteins, hung in there just fine against a jillion-dollar supercomputer.”

If you’re wondering what’s the catch; why invest millions of dollars and talent into a machine that can win a quiz-show, then try to image, besides the publicity and stock value for IBM of course, that this machine could potentially serve in the future as a perfect encyclopedia. You just type in a question or better yet vocalize it, and then you’ll get a fine and quick answer on the spot. I can imagine it something like Wikipedia in your very own iron box at home. I’d love that, but then again, I can’t help to remember that old movie I saw once.