by Tibi Puiu
in Inventions, Nanotechnology, Physics, Research, Technology
Reading Time: 3 mins read
A A
Share on FacebookShare on TwitterSubmit to Reddit

Part of a the recent slew of revolutionary technological and scientific novelties coming off IBM‘s research and development lab, the company has just announced that it has successfully managed to  measure and image for the first time how charge is distributed within a single molecule. The achievement was made possible after a new technique, called Kelvin probe force microscopy (KPFM), was developed. Scientists involved in the project claim that the research introduces the possibility of imaging the charge distribution within functional molecular structures, which hold great promise for future applications such as solar photoconversion, energy storage, or molecular scale computing devices. Until now it has not been possible to image the charge distribution within a single molecule. 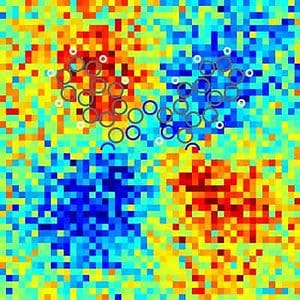 The team, comprised of scientists Fabian Mohn, Leo Gross, Nikolaj Moll and Gerhard Meyer of IBM Research, Zurich, imaged the charge distribution within a single naphthalocyanine molecule using what’s called Kelvin probe force microscopy at low temperatures and in ultrahigh vacuum – these conditions were imperative, as a high degree of thermal and mechanical stability and atomic precision of the instrument was required over the course of the experiment, which lasted several days.

Derived off the revolutionary atomic force microscopy (AFM), the KPFM measures the potential difference between the scanning probe tip and a conductive sample, in our case the naphthalocyanine molecule – a cross-shaped symmetric organic molecule. Therefore, KPFM does not measure the electric charge in the molecule directly, but rather the electric field generated by this charge.

“This work demonstrates an important new capability of being able to directly measure how charge arranges itself within an individual molecule,” says Michael Crommie, professor for condensed matter physics at the University of Berkeley.

“Understanding this kind of charge distribution is critical for understanding how molecules work in different environments. I expect this technique to have an especially important future impact on the many areas where physics, chemistry, and biology intersect.”

The potential field is stronger above areas of the molecule that are charged, leading to a greater KPFM signal. Furthermore, oppositely charged areas yield a different contrast because the direction of the electric field is reversed. This leads to the light and dark areas in the micrograph (or red and blue areas in colored ones).

The new KPFM technique promises to offer complementary information about a studied molecule, providing valuable electric charge data, in addition to those rendered by scanning tunneling microscopy (STM) or atomic force microscopy (AFM). Since their introduction in 1980′, STM, which images electron orbitals of a molecule, and ATM, which resolves molecular structure, have become instrumental to any atomic and molecular scale research today, practically opening the door to the nanotech age. Maybe not that surprisingly, the STM was developed in the same IBM research center in Zurich, 30 years ago.

“The present work marks an important step in our long term effort on controlling and exploring molecular systems at the atomic scale with scanning probe microscopy,” Gerhard Meyer, a senior IBM scientist who leads the STM and AFM research activities at IBM Research – Zurich.

The findings were published in the journal Nature Nanotechnology.