How Poisonous Mushrooms Cook Up Toxins

by Mihai Andrei
in Home science, Research
Reading Time: 2 mins read
A A
Share on FacebookShare on TwitterSubmit to Reddit 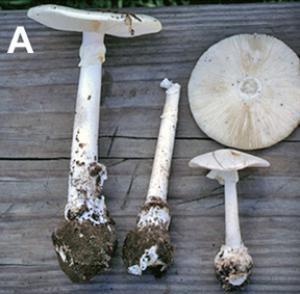 Heather Hallen is a Michigan State University plant biology research associate who has been looking for the poison in the wrong place for years. Alpha-amanitin is the poison of the death cap mushroom, Amanita phalloides. She was searching for a big gene that makes a big enzyme that produces alpha-amanitin.

But she found out that this was not the case. After bringing a technology that sequences DNA about as fast as a death cap mushroom can kill they found remarkably small genes that produce the toxin — a unique pathway previously unknown in fungi. The discovery is reported in today’s Proceedings of the National Academy of Sciences. It is in fact very important because aside from solving a mistery it sheds light on the underlying biochemical machinery.

“We think we have a factory that spits out lots of little sequences to make chemicals in Amanita mushrooms,” said Jonathan Walton, MSU plant biology professor who leads Hallen’s team. “Our work indicates that these mushrooms have evolved a mechanism to make dozens or even hundreds of new, previously unknown chemicals, besides the toxins that we know about.”.

But this elusive gene was hard to find and they used what they term “brute force” — a new machine at MSU that can sequence immense quantities of DNA quickly. It is hard to identify a cooked or partially digested mushroom just by shape and color but a diagnostic test that uses DNA could solve that.