A delicacy and tasty, high-protein vegetarian alternative to chicken. Be wary of what you eat from the woods, though.

by Tibi Puiu
in Agriculture, Health & Medicine
A A

People sometimes use the phrase “tastes like chicken” to describe the flavor of an unusual food. It’s in such common usage that the phrase has become somewhat of a cliché. But some weird foods really do taste like chicken. Such is the case of Laetiporus sulphureus — the Chicken of the Woods.

Laetiporus sulphureus was first described as Boletus sulphureus by French mycologist Pierre Bulliard in 1789. It has had many synonyms and was finally given its current name in 1920 by American mycologist William Murrill. Laetiporus means “with bright pores” and sulphureus means the color of sulfur.

Also called the chicken mushroom, or the chicken fungus, Laetiporus is an easily recognizable, brightly colored fungus that is often found in clusters. The fungus grows in large brackets on trees, mostly oak, that are either living or decaying, causing a reddish brown heart-rot of wood. If the mushrooms are seen fruiting, you can be sure that the fungus has already attacked the tree.

The Chicken of the Woods can also be found growing frequently on eucalyptus, yew, cherry wood, sweet chestnut, and willow. 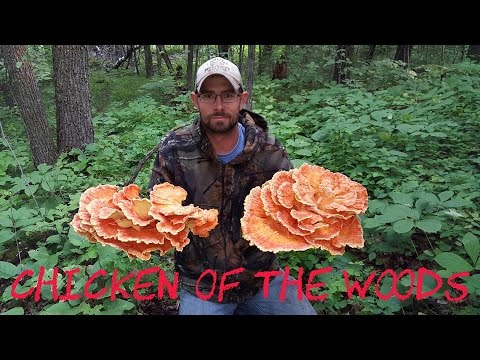 The top surface of the Chicken of the Woods is bright orange and tends to lighten in color near the edges. This fungus has no gills, however, its bright yellow undersurface is covered with tiny pores. With age, the color of the mushroom dulls from bright yellows and oranges to yellow and then pure white. Older specimens tend to become brittle, as well.

People who’ve tried cooking the Chicken of the Woods describe it as “succulent”, with a mild flavor. At first bite, you might find the taste oddly familiar, perhaps reminding you of chicken, crab, or lobster. The mushroom is also high in protein (about 14 grams per 100 grams, which is similar to quinoa) and you feel it. And even its sinewy texture is oh-so-similar to soft, juicy, tender chicken meat. It can make a fine chicken substitute as long as you make sure to fully cook the mushroom, making it a great ingredient for any vegetarian diet.

But although it’s considered a delicacy, in some parts of the world, like Germany and some regions of the USA, Laetiporus is seen as a pest, since it causes brown rot — a type of tree decay. Historically, this fungus was known to damage the wooden ships of the British Naval Fleet. 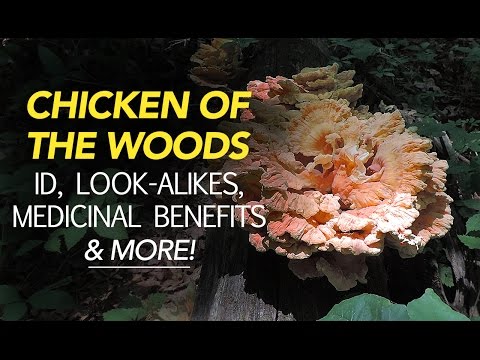 A warning for mushroom and chicken aficionados: the Laetiporus has been known, albeit in very small percentages, to cause allergic reactions. They’re pretty mild nevertheless, like swollen lips or in rare cases nausea, vomiting, dizziness, and disorientation. So be picky and very wary of what you eat in the woods — especially since there are more than just one species of Laetiporus in North America. For instance, Laetiporus huroniensis, which is almost identical to  Laetiporus sulphureus, seems to cause poisoning more often than L. sulphureus, and may also sometimes interbreed with the latter, making it even more difficult to distinguish the two species. L. huroniensis only grows in northeastern North America and seems to love conifers. In western North America, Laetiporus sulphureus doesn’t naturally occur at all, however, two lookalikes do:  Laetiporus gilbertsonii (on eucalyptus) and Laetiporus conifericola (on conifers). Both are known to be implicated in poisonings.

You can contact your local mycological society to find out if there are mushroom foragers in your area (mushroom hunters). Alternatively, you might be able to purchase some Chicken of the Woods from a local farmers market or specialty store.

NOTE: DO NOT eat any mushroom unless you are absolutely certain of its identity.